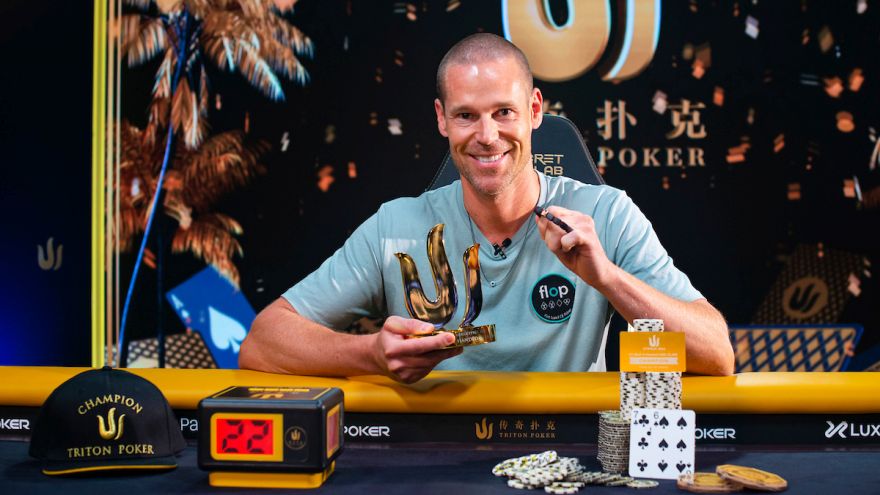 Patrik Antonius took down the Triton Poker $25k opener yesterday, scooping the $825,000 top prize ahead of a record-breaking field at the Triton Super High Roller Series festival in Northern Cyprus.

Antonius was one of 97 players and 131 entries to the first of fifteen tournaments at the Merit Royal Diamond and Spa, a schedule that includes the monster $200k buy-in Coin Rivet Invitational starting this weekend.

Having just hosted the Mediterranean Poker Party, the seats were already warm and Antonius was looking to emulate his old-school colleague, Tony G, who took down the $10k High Roller at the MPP earlier this week.

Seventeen players made the paid spots and sixteen returned for the final day’s play, with Triton co-founder and overnight chip leader, Paul Phua, the first to leave as the short-stacked play took its toll.

When they were down to a final table of eight, Ebony Kenney was still in the mix. The hugely-popular ACR pro is enjoying a Triton Poker SHR series for the first time, Kenney in Cyprus alongside ACR boss Phil Nagy as his “pro invite” to the Coin Rivet Invitational later this week.

Not only was she the first woman ever to feature at a Triton Series final table, her debut resulted in a stunning 5th place finish, the $240,500 cash dwarfing her previous best by some $200k...

After Danny Tang had departed in 4th, one of the hands of the tournament played out, with Antonius under huge pressure on the river from Bulgaria’s Fahredin Mustafov...

Mustafov raised on the button and then bet every street with complete air...

...and somehow Antonius, after six minutes thought and using all his timebank cards, found the river hero call with his tournament life on the line and massive ICM implications! See it play out below...

That incredible call put Antonius on the road to victory and after O’Dwyer exited in 3rd spot, the heads-up battle lasted only three hands. Antonius’ flopped a straight against Mustafov’s pocket jacks and that’s all she wrote...

“It has a special feel,” Antonius said afterwards, adding: “All the top players are playing this tournament, so it’s nice to win, I have to say. It’s a nice way to start a series like this. It’s always a good feeling to win a tournament. These are the nicest events that exist in poker…everything is top, top quality. They couldn’t do a better job. I’m happy to play these tournaments and I’m happy to win my first one. I’m happy. I’m happy.”

The Triton Poker SHR Cyprus Series continues with the $30k buy-in NLHE 6-handed event now down to a final table, and we’ll bring you all the best of that event tomorrow, so be sure to check in!