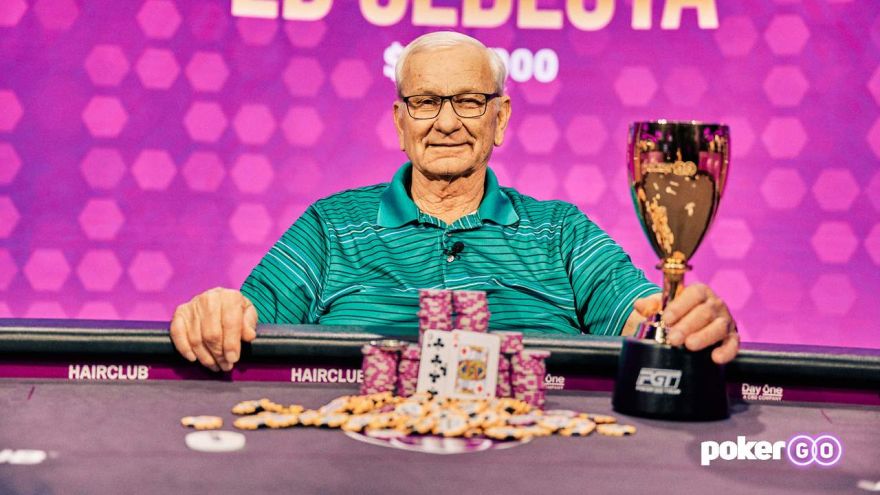 Ed Sebesta fought off Nick Schulman heads-up to take down event 3 of the 2023 PokerGO Cup in Las Vegas on Saturday evening, picking up $216,000 and breaking through the $1million career earnings milestone...

Sebesta was among 90 entries for the third of eight highroller events at the PokerGO studios in the Aria casino, and just like event 1, that meant 13 players in the money.

Foxen would fall first, short-stacked and looking to double up on the first hand of the night...

Sixth spot and $54,000 for Foxen was enough to edge her into 5th spot in the leaderboard, 1 point ahead of husband Alex.

Katz couldn’t progress much further, falling in 4th after Mateos had departed in 5th, leaving Phillip Shing, Nick Schulman and Ed Sebesta to fight out the podium placings.

Shing had to settle for 3rd place and $108,000 when pocket jacks held up against the smaller pair this time...

Heads-up didn’t last long, Schulman hoping to double but the turn having other ideas...

...and Sebesta had landed his third victory of the past year, his excellent run also seeing a second, fourth and fifth in PokerGO Tour (PGT) events.

Sebesta’s weekend win not only took him through the $1million career tournament earnings milestone, but also catapulted him to joint 1st on the PokerGO Cup leaderboard, alongside Sean Winter.