Aram Zobian took the $207,500 first prize in event 2 of the 2023 PokerGO Cup in Las Vegas, fending off Punnat Punsri heads-up for the title 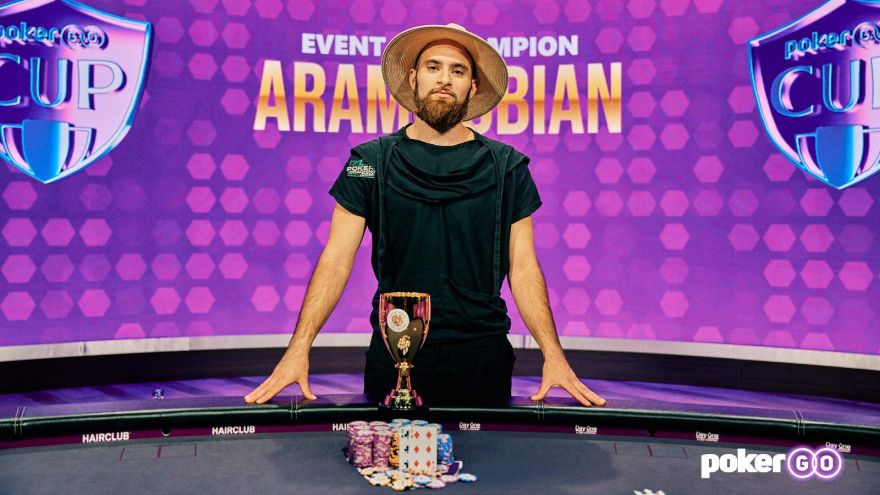 The second of eight highroller events at the PokerGO studios in the Aria saw 83 entries paying $10k apiece, 12 players sharing in the $830,000 prizepool and all of them looking for leaderboard points as well as cash.

Among those who didn’t make the grade this time were Daniel Negreanu, David Peters and Adrian Mateos, the money bubble bursting when Zobian disposed of Brian Batt...

With a min. cash now locked up it was time to get down to the serious business of laddering and racking up leaderboard points, with six players making it to the final table at the end of day one, Zobian holding the chip lead.

Zobian was joined by Kristen Foxen, Seth Davies, Andrew Moreno, Punnat Punsri and PokerGO founder Cary Katz, the latter the first to depart when he lost with A♠ 10♠ to Punsri’s A♦ 9♣.

Punsri also accounted for Moreno in 5th, turning the flush this time to send last summer’s $1.4million Wynn Millions winner to the rail.

Down to four and Davies decided to stake his relatively short stack on pocket deuces only to run into Punsri on a heater...

With the prizemoney now on the verge of six-figures, Kristen Foxen was hoping to go one better than her husband in event 1, Alex Foxen taking the runner-up spot to Sean Winter. It wasn’t to be though, this time Zobian turning up with pocket rockets......

That left Zobian to face Punsri heads-up for the title and it was the Rhode Island pro who came out on top...

Event 3 on the 2023 PokerGO Cup schedule has reached the final table, with Philip Shing in the overnight lead. We’ll bring you the best of the action and results tomorrow, so be sure to check in daily.