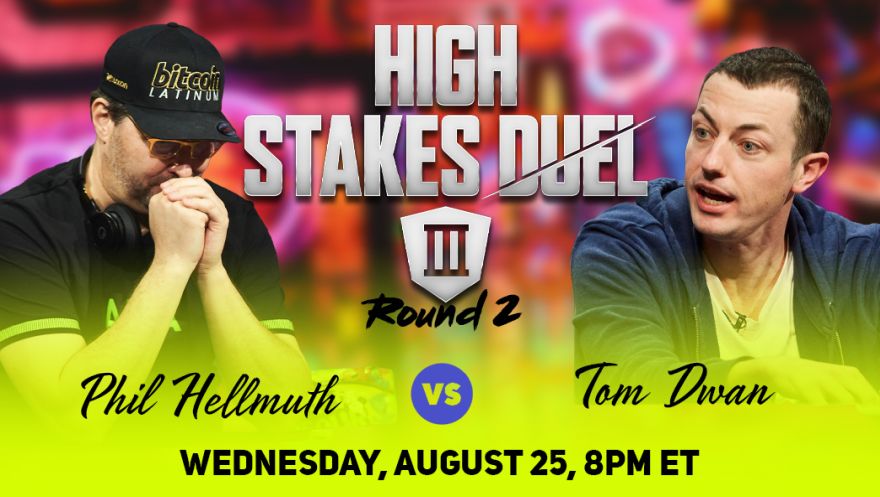 Phil Hellmuth will face Tom Dwan in round 2 of High Stakes Duel III, the 15-time WSOP bracelet winner looking to land his 8th consecutive heads-up win and avenge a famous and painful loss from 2008 in the process!

News that Dwan would finally get his shot at Hellmuth came after Fox sports broadcaster Nick Wright turned down his rematch clause after losing $50k to Hellmuth in round 1 of the third High Stakes Duel showdown.


Despite believing he had good chances to defeat the “Poker Brat”, Wright took to Twitter to announce: “I can’t justify to my wonderful wife and kids laying out another $100,000.”


That left the door, or seat, open for Tom Dwan – the legendary pro recently claiming that Negreanu queue-jumped to take his pot-shot at Hellmuth, failing ignominiously in a 3-0 defeat, the same scoreline as in Hellmuth’s victory over Antonio Esfandiari.


For Hellmuth, a match-up with Dwan will be about far more than the money, the $100k apiece buy-in a relatively paltry sum for the $multi-millionaire.


Instead, it will be a chance for revenge after Dwan knocked him out of the 2008 National Heads-Up Poker Championship, an infamous moment in poker history.

After cracking Hellmuth’s aces with a pair of tens, Dwan had to face the full Poker Brat treatment, with Phil telling Dwan how terribly he had just played.

In reply Dwan several times challenged his older rival to play for any stakes at any time, but that never happened, despite the legendary “Durrrr challenge” being issued just a few months later.

“We’ll see if you’re around in five years,” was Hellmuth’s parting shot, and now, some 13 years later, we’ll see if Dwan still has what it takes to defeat the so-far undefeated king of High Stakes Duel.

The match is scheduled for August 25th at 8pm, the venue PokerGO’s studio in the Aria. Naturally, we’ll have all the best of the action and the expected pre-match “verbals” right here on HighStakesDB.