With 69 entries, the prizepool was a monster $6.9million, with 9 players paid and two $million+ prizes up top 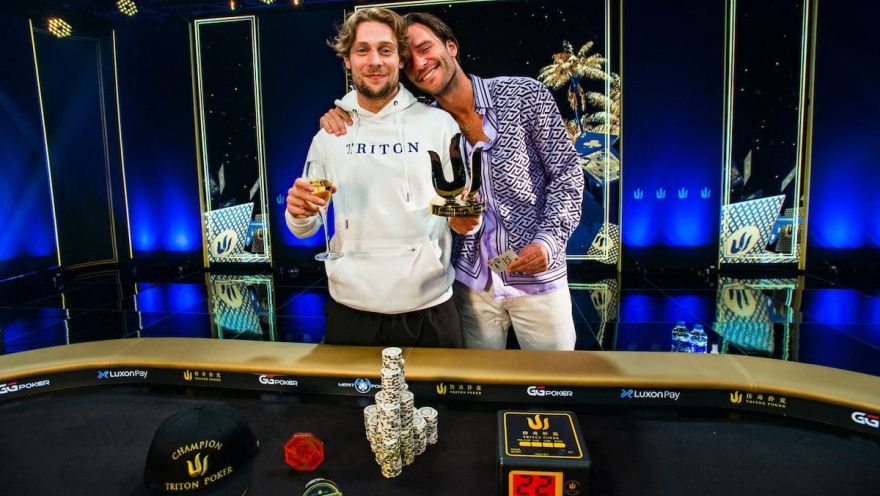 Day one saw Australia’s Michael Addamo top of the chip counts, helped by KOing Johan Guilbert twice, pocket kings and pocket tens making it an expensive day for the Frenchman.

Jungleman Daniel Cates was another casualty, as was Phil Ivey, and they were joined on the rail by the likes of Timothy Adams and Mikita Badziakouski.

When the bubble burst, it was event 1 winner Andras Nemeth who missed out, his short stack falling to Tom Vogelsang (not to be confused with his German highstakes namesake, Christoph)...


Quads and a Royal Flush

The Dutch pro didn’t have things all his own way, however, as the following incredible run out shows...

...although he soon bounced back with a monster hand of his own...

Meanwhile, Elton Tsang, Ali Imsirovic and Triton co-founder Paul Phua had been eliminated, as was Daniel Dvoress in 5th and then Mike Watson in 4th, with Jake Schindler falling in 3rd to leave us heads-up.

As with event 1, where two Hungarians battled for top honours, so too in event 2 of the 4-tournament series, where two Dutchmen had sewn up $million paydays and were looking to add the trophy.

It only took two hands to separate them, with Meulder check-calling the flop and turn and then showing the nuts when Vogelsang shoved the river with the lower straight...

The Triton Poker Cyprus action continues today at the Merit Royal Resort and Casino with the opening day of the $75k buy-in Short Deck and we’ll bring you all the best of the action and results right here.