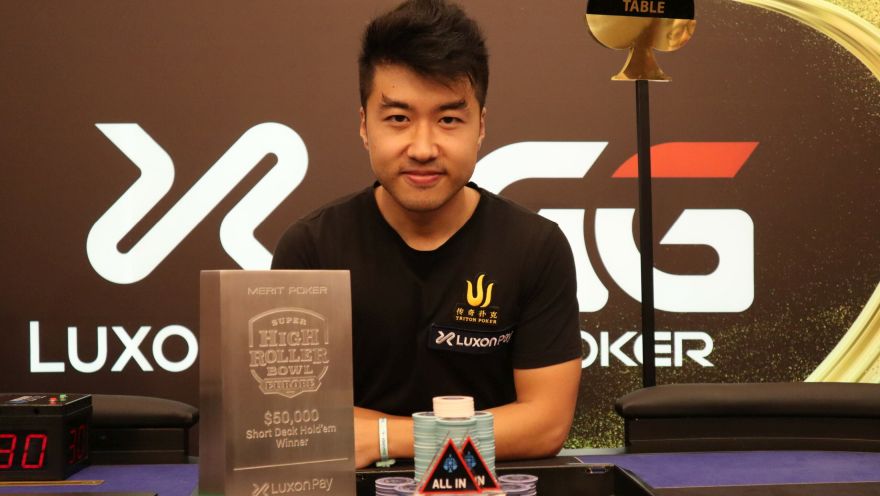 It was Santi Jiang’s third final table of the series and it brought the Spanish pro his first Super High Roller Bowl victory, a $756,000 scoop of the $50k buy-in Short deck, event 5 on the schedule.

Despite the hefty buy-in, there were 22-rebuys from the 20 unique players who fancied their chances at the 36-card variant of the game, the 2s through 5s removed from the deck.

The half-dozen who made it to the end of day 1 with a stack had at least doubled their buy-in, presuming they hadn’t been among those firing more than one bullet of course.

Chris Brewer was there yet again, showing his Short deck skills with a 5th and a 2nd to his name this week already, but he’d have to settle for 6th spot this time and a $105k cash.

Down to just three now and for Russian pro Timofey Kuznetsov it would be a third-place finish, cashing for $336,000 and leaving the heads-up battle between Jiang and Seth Davies.

Davies had cashed in the two on-Short deck events that the Merit Royal Hotel & Casino, in Kyrenia, Cyprus had hosted so far, but he couldn’t add a win as Santi Jiang stole the show and the $756,000 top prize, Davies’ taking $504,000 as runner-up.

Meanwhile, the SHRB Europe has already moved on to event 6, a $100k buy-in NLHE with the likes of Phil Ivey, Stephen Chidwick and Michael Addamo among the assembled stars.

There is also another Short deck event to come, with a $100k buy-in, and then the $250k buy-in SHRD Europe Main Event, with a $50k NLHE farewell event 9 to finish off the highstakes series.

We’ll bring you the best of the action and results from all of them, so be sure to check in regularly!