Sam “SquidPoker” Grafton has taken down the Coin Rivet Invitational in Northern Cyprus for a monster $5.5million cash 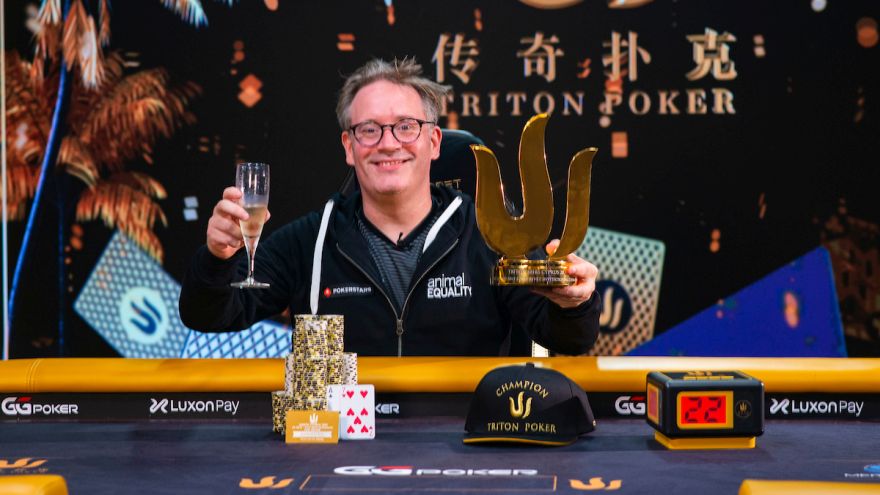 Sam “SquidPoker” Grafton has taken down the Coin Rivet Invitational in Northern Cyprus for a monster $5.5million cash, seeing off Linus Loeliger heads-up in the $200k buy-in amateur-meets-pro tournament...

There were 115 entries to the exclusive tournament held as part of the Triton Poker Super High Roller Series in north Cyprus, with rich amateurs able to invite the pro of their choice.

The monster field produced a $23million prizepool and that meant there were no less than seven 7-figure $cashes waiting to be won, with 17 players cashing in total.

Missing out were the likes of Phil Ivey (despite firing two bullets and making an incredible call for his tournament life), ACR boss Phil Nagy, Erik Seidel, Michael Addamo, Patrik Antonius, Talal Shakerchi, Paul Newey and a host of other huge names from the pro and wealthy rec crews.

Chris Brewer looked like a man who’d just lost $200k and found the bubble-boy tag when he bust out in 18th spot, with those left having sewn up a tidy $380k cash.

Kings Casino boss Leon Tsoukernik wouldn’t go much further (15th place for $400k) and nor would Dan “Jungleman” cates (12th for $440k) while Anatans “Tony G” Guoga had to settle for 10th place ($485k and the final table bubble) after running into Ebony Kenney twice.

The ACR pro was having the time of her life in Cyprus, taking 5th spot for a lifetime best score in the $25k earlier in the week and incredibly replicating that feat here in the $200k, only bowing out to a cruel turn card against French trader, Karl Chappe-Gatien...

That meant 5th spot and $1.7million for Kenney, just one spot shy of landing the biggest-ever cash in poker history by a woman.

Down to four and the battle for the $5.5million top prize raged on, Fedor Holz guaranteed a spot in the all-time top ten once again if he finished first or second.

It wasn’t to be for the German former-wunderkind, as he fell in 4th spot when a cruel runner-runner came in for Chappe-Gatien...

The Frenchman was the life and soul of the final table, and, although unorthodox, his play had taken him to within a few hands of glory. The slings and arrows of poker fortunes decided otherwise, however, and he went from massive chip leader to out in 3rd.

The last of his chips went to Sam Grafton and the Englishman put them to good use, fighting off a strong comeback from Linus Loeliger to secure the biggest victory of his career...

The highstakes action continues from Cyprus with the triton Poker Main Event kicking off, the $100k buy-in likely to continue the record-breaking numbers we’ve seen all week. As always, we’ll bring you the best of the action right here, so be sure to check back in regularly!