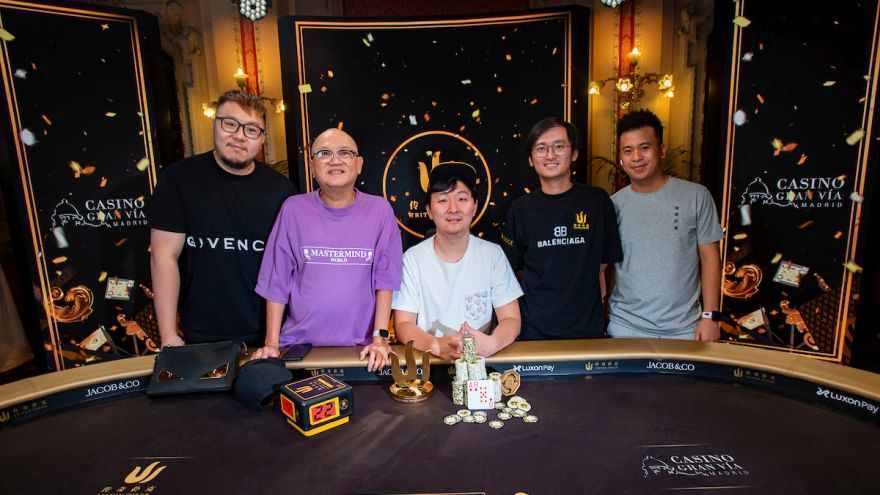 High stakes cash game specialist Rui Cao showed his tournament skills are also a force to be reckoned with by scooping his second Triton Poker Short Deck title and a €497,000 payday...

For those following our daily reports on the Triton SHR series playing out in Madrid’s Casino Gran Via, you may be wondering what happened to event 4 on the 13-tournament schedule

A good question, previously answered by Triton organisers who stated: “In Chinese culture, the number 4 is an unlucky number so no event, table or seat number 4.”

So, event 5 and this time a €25k buy-in Short Deck ante-only tournament, which attracted 68 entries, 36 of them unique, and a €1.7million prizepool that would be shared between nine players.

As we all know only too well, poker can raise you up one day and slap you down the next, and that’s pretty much what happened to Chris Brewer.

After winning event 3, Brewer found himself sitting pretty as the bubble neared, but chose to take the aggressive route and first ran his AQ into jacks, then his remaining chips into kings – Brewer out in 10th and penniless. As the live reporting out it: “Some days you’re the windshield, other days you’re the bug!”

Ike Haxton and Jason Koon were two of the bigger names who couldn’t make it much deeper, 8th and 6th respectively for the US duo, but Tom Dwan was still in the mix.

Dwan had given up his chance to battle Phil Hellmuth for a third time in the High Stakes Duel, the Poker Brat instead taking on and defeating Scott Seiver in an $800k match in Las Vegas last night.

Tom was looking at a similar paycheck without the downside if he could win in Madrid, but his short stack eventually fell when he ran his last stand Q♥ 10♣ into Cao’s K♠ 10♥

Heads-up against Richard Yong, and Cao maintained his aggressive approach, eventually wearing down the co-founder of the Triton Poker series.

The final hand was a typical Short Deck affair, full house over full house sealing the victory for Cao...

“I got the result…I think I’m better at short deck than long deck. It suits my personality. I’m pretty aggressive, and that’s better in short deck.”