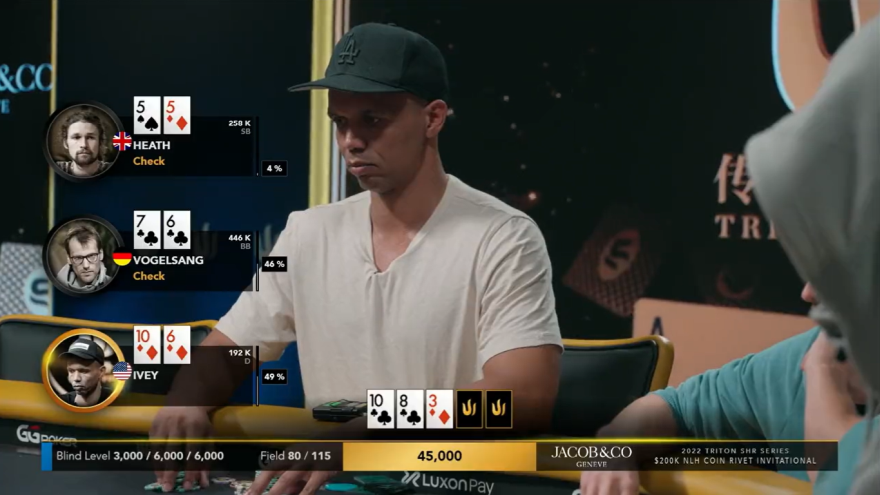 The $200,000 buy-in Coin Rivet Invitational at Triton Cypress in September that saw 45 wealthy, recreational players each invite a pro of their choice to join a capped field was one of the biggest poker tournaments of 2022.

Ninety players and 25 re-entries made for a $23 million prize pool with $5.5 million guaranteed to the winner. On the second day of the event, Phil Ivey and Christoph Vogelsang were involved in a hand that's still being talked about in some circles.

A flop of 10c-8c-3d gave Ivey top pair and Vogelsang a straight flush draw. The blinds checked to Ivey and the 10-time WSOP bracelet winner bet 16,000. His tablemates both called, boosting the pot to 93,000.

The turn (8h) paired the board, prompting Vogelsang to take the lead and bet 55,000. Ivey made the call while Heath mucked his pocket 5s.

The dealer peeled the river (Kh) and Vogelsang missed his straight flush draw, his hand now a measly seven-high. Christoph decided to put the pressure on Ivey, putting him all-in for 121,000, likely factoring into the equation that Phil was on his second bullet and his tournament life was on the line.

Ivey tanked for a few minutes while a hooded Vogelsang looked for a fold. The fold never came as Ivey caught the bluff, put his remaining chips in the pot, and scooped a massive pot of 444,000.

You can watch the hand unfold in the clip below: