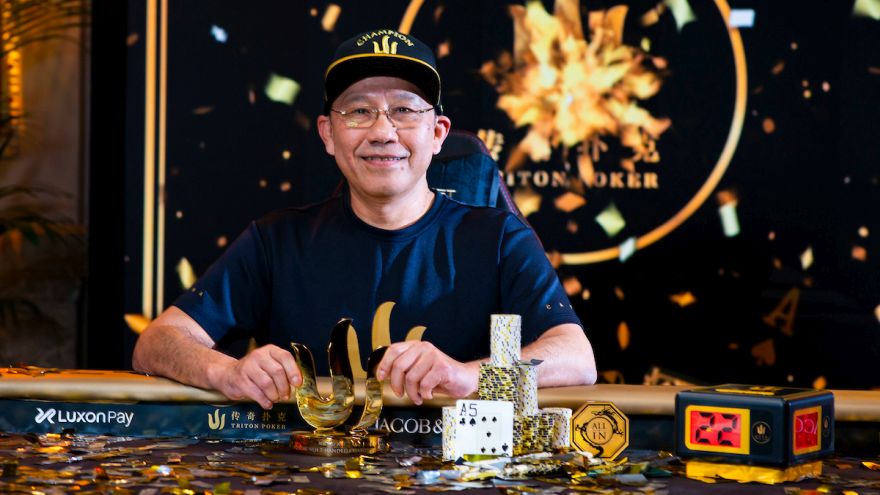 It may have taken him 6 years but Paul Phua can finally tick a Triton win off his bucket list after scooping the €30k 7-handed title in Madrid last night – a win worth €740,400 in cash and so much more in non-monetary terms for the co-founder of the series.

Phua, along with Richard Yong, came up with the idea of a travelling Super High Roller series back in 2015, and launched it in the Philippines the following year.

Since then, he has cashed 17 times across the globe in his own events, and yesterday he was gunning for number 18 and, remarkably, a first Triton title – three runner-up finishes his previous best.

He was up against some of the toughest and most formidable highstakes MTT players in the world, however, with Phil Ivey, Mike Watson, Fedor Holz, Ike Haxton, and Erik Seidel all making it to the paid spots and eyeing the title.

Ivey would be the official final table bubble-boy, his ace outkicked by Haxton, and that left the final table headed by the commentator’s nightmare, Thailand’s Kannapong Thanarattrakul.

With the short stacks falling like dominoes, Thanarattrakul’s end came quicker than expected, but his 4th place €266,500 was still a story in itself, almost 10x his previous best live cash.

Down to just three, and Phua ended Haxton’s hopes after “Hollywood Ike” decided to roll the dice on a call, the flop a painful one and no help thereafter.

That left Phua and Seidel heads-up with equal stacks, with Phua stating afterwards: “I thought the fourth second place is coming. But somehow the cards fell for me.”

They did indeed, Phua overcoming Seidel’s pocket sevens and pocket jacks to not only survive, but build a huge lead. When the end came, the crowd erupted...

...Phua finally landing the victory he’d been chasing for so long.

“I knew he’d be tough. Erik’s so experienced, such a great player, but anything can happen,” Paul said of the heads-up battle.

The players are already deep into event 3 of the scheduled 13 tournaments at Madrid’s Casino Gran Via, a €20k buy-in Short deck ante-only.

Some of the players, however, might need to brush up on Triton’s Short Deck rules, although Rob Yong’s error at least had a happy ending...

I had my best ever feeling in a tourney today. Didnt realise Ace in shortdeck also counts as Five . Picked my stuff up, moaned about missing draw, thought was out - & miracle happened & pot got passed to me 🔥🔥 Amazing feeling @tritonpoker €20K SD ⁦@CasinoGranVia⁩ pic.twitter.com/x5GK87MyzK

We’ll be bringing you all the best of the action, results and stories from Madrid, so be sure to check in regularly for the latest updates!