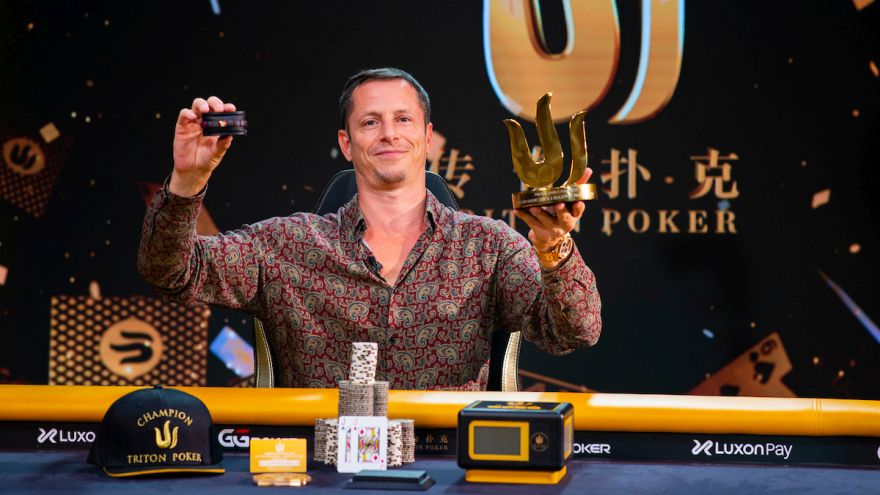 Frenchman Karl Chappe-Gatien scooped the Triton Poker $40k Short Deck title, just days after learning the game, adding a trophy and $565,000 to the legion of fans he has accumulated at the Super High Roller Series in northern Cyprus...

The poker-loving amateur enthralled viewers and players alike with his deep run in last week’s $200k buy-in Coin Rivet Invitational, humorous, likeable, friendly and exciting all the way to his 3rd-place $2.6million finish.

Last night he was playing a game he had only recently learned, the action-packed Short Deck, after his pro partner from the big invitational, Danny Tang, gave him a crash course in the 36-card variant and talked him into playing the $40k.

Twenty-four players paying 45 entries at $40k apiece produced a $1.8million prizepool, Chappe-Gatien firing two bullets and making it to the paid spots on day two when Rui Cao lost a huge hand to Michael Zhang and bubbled to Koon soon after.

Yu was first out in the money...

...and he was soon followed by Elton Tsang and Jason Koon, the latter another victim of the Frenchman, falling in 5th for $155,000, his 23rd Triton Poker career cash for the brand’s ambassador.

Chappe-Gatien continued his rungood with another flopped set to dispose of England Michael Zhang in 4th...

...with Lim falling to Lee’s aces to set the heads-up battle for the title, which came to a conclusion with the following hand...

That river card gave both men straights, but Chappe-Gatien’s was better and he lifted the trophy and the $565,000 top prize.

“I was feeling good but I didn’t expect anything. I wanted to have fun,” revealed Dubai-based day trader Chappe-Gatien afterwards, adding: “For sure I will come back. When is the next one?”