Dressed as ‘Macho Man’ Randy Savage throughout, Cates started out as one of 112 entries to the prestigious event 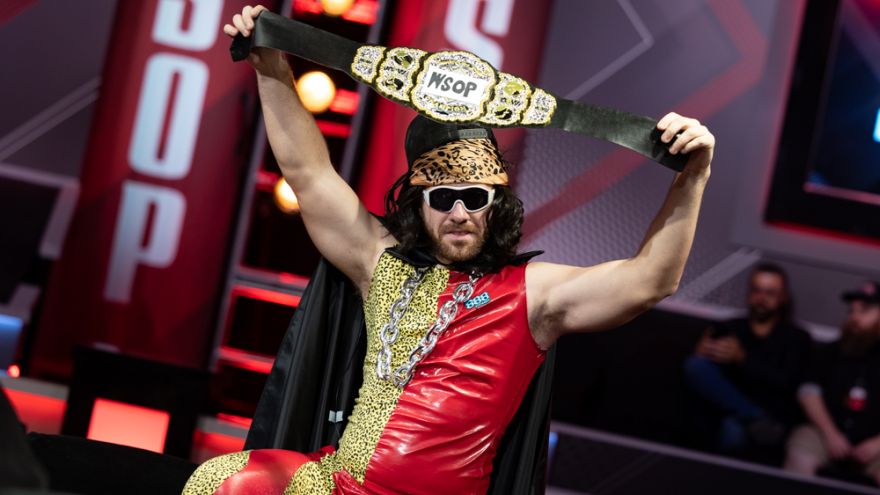 Dan Cates, the irrepressible Jungleman Dan, scooped his second WSOP gold bracelet and a $1,449,103 payday by winning the $50,000 Poker Players Championship – incredible back-to-back victories in one of the most-respected tournaments on the World Series of Poker schedule...

Dressed as ‘Macho Man’ Randy Savage throughout, Cates started out as one of 112 entries to the prestigious event, previous winners ranging from Chip Reese in the inaugural 2006 running through Michael Mizrachi’s three victories to Cates’ own takedown last year.

By the end of day 3 all those names and more had departed, with reigning WSOP main Event champ Koray Aldemir a rather unlikely survivor, though another day’s play would see him fall in 6th spot, a $258,812 cash, with the remaining five bagging overnight.

Returning to settle the destination of the gold bracelet and the lion’s share of the $5,362,000 prizefund were Cates, Aldemir’s compatriot and mixed game “coach” Johannes Becker, Brazil’s Yuri Dzivielevski, Japan’s Naoya Kihara, and England’s Benny Glaser.

Short-stacked Becker was first to fall, losing out in a No Limit Hold’em hand...

Dzivielevski got out of the way after Glasser bet and the run out saw Becker hit the rail in a very impressive 5th spot for $343,531

Glaser was next to leave after deciding to sit pat with 9-8-7-6-4 against Tokyo-born pro Kihara in a hand of No-Limit 2-7 Single Draw only to receive the bad news that his opponent’s all-in call with a pat 8-7-6-5-2 was too good.

Down to just three and Kihara, already with one WSOP gold to his name from a decade earlier, ran into Cates several times, the final blow coming in Limit 2-07 triple Draw. Kihara’s 3rd spot was worth a career-best $639,257.

Heads-up was a marathon 7-hour battle, the chip lead passing back-and-forth numerous times as Cates sought to end Dzivielevski’s bid for a second gold at his seventh final table of the 2022 series.

Eventually he did just that, the final hand coming in No Limit Hold’em...

That Gave Cates his remarkable back-to-back wins, something not even 3-time PPC winner Mizrachi had managed, and a monster $1,449,103 payout to go with the gold bracelet.