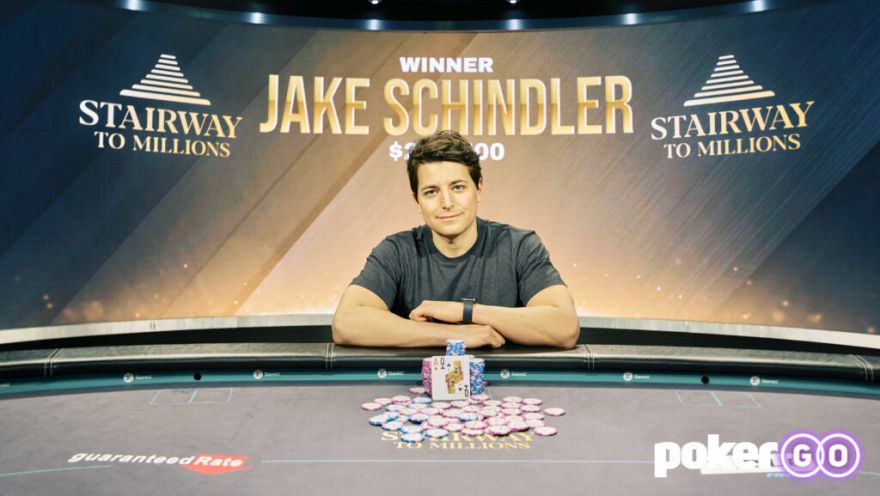 Jake Schindler bested a small but very select field to bag the PokerGO Stairway to Millions $25,000 buy-in Super High Roller tournament, pocketing $287,500 and his entry fee for the $51k 7th event of the 8-tournament series...

The 25 entries in event 6 had been whittled down to just four by the end of day one, with Schindler busting Vikenty Shegal on the money bubble, to leave him plus Alex Foxen, Nick Petrangelo and Sean Winter in the four paid spots.

With plenty at stake, even by the standards of four of the world’s leading highroller tournament players, they started day two cagily, but finally a big clash occurred – with Schindler coming out on top.

The other two players, Alex Foxen and Nick Petrangelo debated who would be next to hit the rail, Foxen’s short stack looking to double in the following hand, all-in pre-flop...

That brutal river meant 3rd spot for Foxen and a $100k cash, leaving Petrangelo and Schindler heads-up to decide the winner, and who would have a free entry to the penultimate leg of the Stairway to Heaven series.

It proved to be plain sailing for Schindler heads-up, pulling away from his opponent and securing victory with the following hand, Petrangelo calling the pre-flop shove...

Schindler told PokerGO reporters afterwards: “I think I made one mistake with ace-ten, but other than that I think the hands were pretty straightforward. The cards played themselves for the most part. I didn’t have too many tough decisions.”