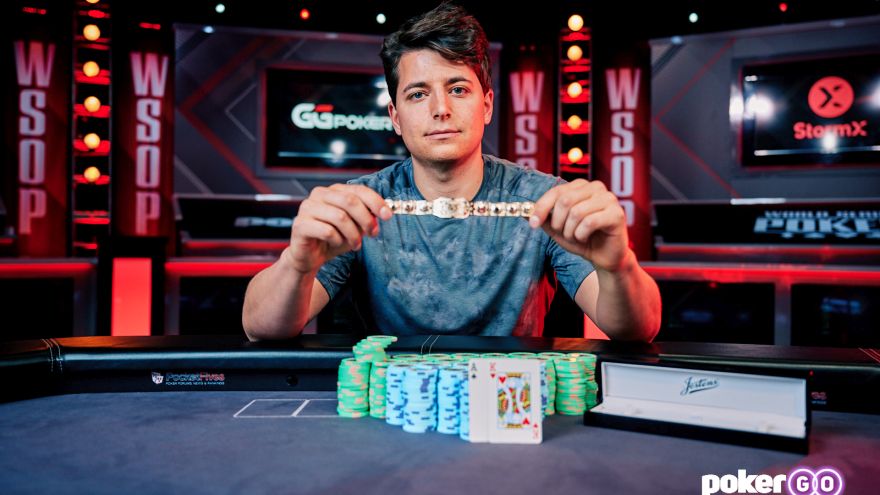 Jake Schindler bagged his first WSOP bracelet, taking down the $50k NLH High Roller for a monster $1,328,068 payout, leapfrogging Fedor Holz into 12th spot in the all-time moneywinners list in the process...

After a near-miss earlier in the week, Jake Schindler (@Jake__Schindler) captured his first @WSOP bracelet in Event #12: $50,000 NLH High Roller.

Schindler has been much in the news lately, and not because of his skills at the game, but rather the cheating allegations that he has so far refused to comment on.

However, the furore that erupted after Alex Foxen and others outed Schindler, Ali Imsirovic, Bryn Kenney and other leading players, doesn’t appear to have affected Schindler’s play.

Despite apparently being blackballed from the recent EPT and Triton Poker series, Schindler added his first WSOP gold to a runner-up spot in the $25k earlier in the week.

Marius Gierse was the unfortunate bubble-boy and by the time day two ended, only 6 players remained, although Shaun Deeb, Mikita Badziakouski, Chance Kornuth, Dan Shak and Dan Smith had all secured a payday before exiting.

Back for day 3 and Andrew Lichtenberger was first to fall, his A♠ 5♠ losing out to Brek Schutten’s A♦ Q♦, with David next out in 5th spot...

Shorr then ran his pocket 8s into Schindler’s 10s to exit in 4th, with Punnat Punsri’s excellent run ending in 3rd and a $593,481 payday.
That left Schutten to face Schindler heads-up, and it was a cooler that decided things in the latter’s favour...

That was enough for Schindler to break his bracelet duck, but it was a subdued celebration – a kiss for his girlfriend on the rail and a “what’s your name?” comment from a Hossein Ensan fan the only interaction.

No interview meant no chance to quiz Schinlder on his success or his cheating, but there are likely to be several more chances for both as the series is barely out of its opening week.