Robbi Jade Lew played heads up against Adelstein and pulled off one of the most incredible hero calls we’ve ever seen, but did she misread her hand? 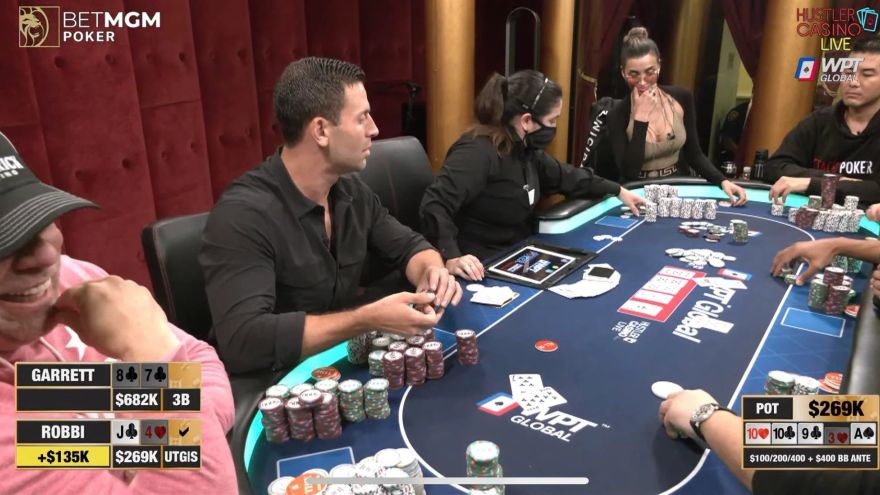 Garrett Adelstein has stormed off Hustler Casino Live following a suspicious hand against newcomer Robbi Jade Lew. Lew played heads up against Adelstein and pulled off one of the most incredible hero calls we’ve ever seen, but did she misread her hand?

The look on Garrett Adelstein’s face as the cards were flipped over was unlike anything we’ve seen from the man before. Bewildered doesn’t even come close. Adelstein is a regular on the Hustler Casino Live show and said to be the biggest winner with over $1.8 million in winnings. He is also thought by many to be a candidate for best live cash player in the world.

Adelstein raises to $3,000 from the third blind with 8c7c and Lew calls in the straddle holding Jc4h.

The turn is the 3h and Adelstein fires out $10,000. Lew now goes into deep thought for a short while before deciding to min-raise to $20,000. Adelstein also mulls over his decision before 3-bet jamming, putting Lew all in for almost $109,000 to call.

This is where it all starts to get weird.

Lew spends at least 15 seconds checking her cards before deciding to call it off after saying out loud she has a bluff catcher.

The players agree to run it twice and Adelstein loses both runs.

When the cards are turned over, his face has a look we’ve never seen before. He simply cannot believe that anybody could ever make such a call, let alone a relative novice to the game.

Doug Polk immediately tweeted that Hustler should end the stream and begin an investigation and many of his followers agreed, thinking that something dodgy was going on.

With the Mike Postle scandal still fresh in everybody’s mind it’s easy to understand what people are thinking.

Joey Ingram was quick to fire up an emergency live broadcast to dig through what had just happened.

Reviewing the Hustler Casino Live footage we see that Garrett Adelstein, still looking stunned, gets up and leaves the playing area and is followed by Robbi Lew and later by another player at the table known as Rip, thought to be a business partner of Lew.

Some arguing can be clearly heard in the background before Rip returns to the table furious, claiming that Adelstein had asked for his money back (almost $135,000).

We later learn that Lew voluntarily handed the money back to Adelstein after asking what would make him happy and return to the game. He took the chips but quickly bagged up his own stack and left without saying a word.


Did Robbi Lew Misread Her Hand?

Joey Ingram’s live stream picks up on the fact that Lew might have indicated she misread her hand. In the previous hand she did, in fact, hold J3 and might have made this outrageous call thinking she had a pair of threes instead of only jack-high.

This makes sense and was backed up by none other than Nick Vertucci, Creator/Producer of Hustler Casino Live, who phoned Ingram during the show.

It’s easy to understand that there may have been some embarrassment at making such an error in front of the cameras which is why Lew didn’t choose to reiterate what she had done.

The other players at the table were also bewildered at what had just happened. They were confused about why she would return the money to Adelstein willingly but it turns out that Lew has more than enough wealth to not care one jot about a “mere” $135,000.

Speaking later on the Hustler Casino Live show, Lew said: “I folded to him earlier in the night when I thought that he was just on a draw but let him have it. He was just on a draw, which meant he did not have a made hand after the turn. I thought that I’m holding a blocker with the jack of clubs, the jack flush draw missed and straight draw missed for me. So, with a three as a bluff-catcher sort of thing. I didn’t look back at my hand to see that it was jack-four.”

Given the seriousness of cheating accusations in this case Garrett Adelstein gathered his thoughts after leaving and posted a response on his Twitter account.

He points out that he reviewed Lew’s play from previous sessions and saw that she had a tendency to fold bluff catchers to river bets in almost all cases, only calling when she had a relatively strong hand.

He explains that one of the scariest ways to cheat in a case like this is a vibrating device to indicate when the player has the best hand, adding that Lew’s inexperience meant she didn’t understand how calling in this spot is going to be seen as a giveaway to strong players. This obviously isn’t taking into account the theory that she simply misread her hand.

Adelstein adds that he believes in the integrity of the Hustler Casino Live setup and isn’t holding them responsible.

In a more accusatory tone, Adelstein says that when the pair walked away from the cameras Lew was told that this is all about to go viral and be viewed by millions of people. He wrote “her face clearly melted once I said this.”

It was at this point she offered to pay Adelstein the money back without any prompting from him.

Adelstein ends his message by saying there is no way that Lew misread her hand and that following aggression from RIP he decided there was no way he could play again today and left for home.

This story only broke hours ago and we can be certain that a lot more will be said.