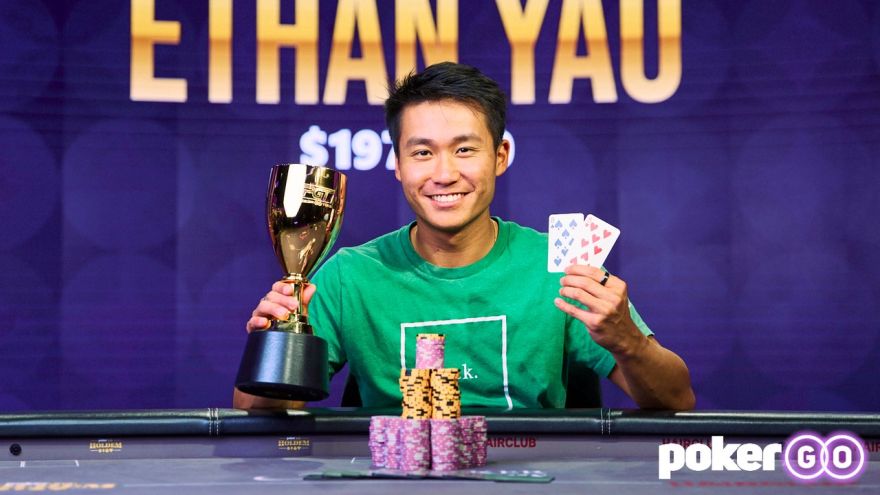 Poker streamer Ethan “Rampage” Yau bagged the first $10k High Roller title of his career when he saw off Alex Foxen heads-up to take down event 2 of the Poker Masters in Vegas for a $197,600 cash.

Yau, known popularly online under his “Rampage Poker” tag, was one of 76 entries to the $10k buy-in NLHE tournament, the YouTuber, streamer and highstakes cash game player finding himself alongside the likes of seasoned highrollers such as Daniel Negreanu, Alex Foxen, Stephen Chidwick and Adrian Mateos.

It was the latter who would miss out on the 11 paid spots, the Spanish pro shoving in the small blind to a Yau open and failing to improve...

That meant a $22,800 min cash was sewn up for the remaining players, with English highstakes crusher Chidwick, Arizona pro Corey Wade and Daniel Negreanu all failing to improve on that cash.

Negreanu took a friendly swipe at Yau on Twitter as he shared his final table run-bad...

The next two to fall had already cashed in event 1, with Jacky Wang adding an 8th spot to his previous 5th place, and Jeremy Ausmus having to settle for 7th place and $38k after taking down the Poker Masters opener for $204k.

Yau’s demolition of the opposition continued at the final table, KO-ing Oya, Brinkenhoff and Song to set a heads-up battle with Alex Foxen.

With a 12-1 chip lead, it could have been over quickly, but Foxen fought back well, but ultimately couldn’t prevent Yau from taking down the win...

The win vaults Yau into second place in the overall standings, Ausmus still leading the race for the Purple jackets after two of the scheduled 10 events.

We’ll be back tomorrow with all the best of the action from event 3, the Poker Masters $10k PLO for fans of the four-card game, so be sure to check in!