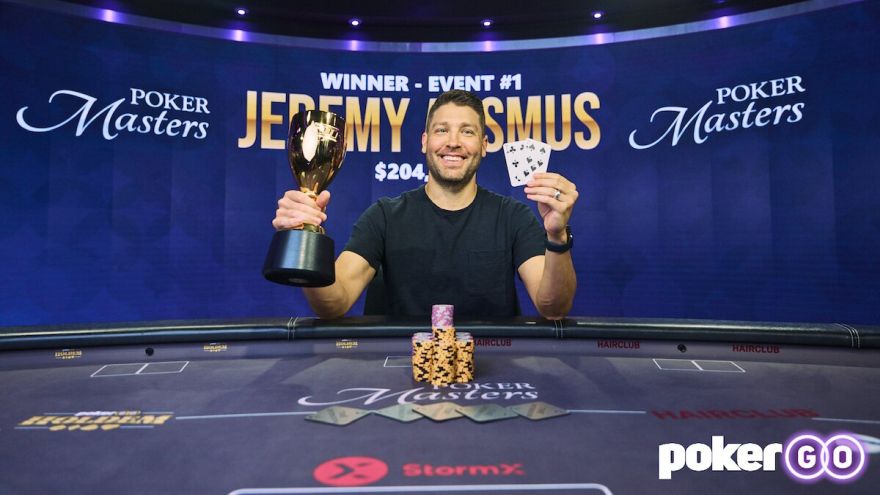 Jeremy Ausmus has bagged the first title of the 2022 Poker Masters, taking down the $10k buy-in opener for a $204,000 score after defeating Nick Schulman heads-up.

There were 85 entries to the series opener, all looking to cash early and get their name and points on the Purple Jacket leaderboard, a race won by Michael Addamo last year.

There would be no Ali Imsirovic or Jake Schindler this year, the PokerGO organisers of the series releasing a statement that the alleged cheats wouldn’t be allowed to play until the end of the year at earliest.

Their PGT leaderboard points were also stricken off the record, creating some extra impetus, for those who were allowed to play, to do well.

First order of play was to reach the paid spots and it was Ausmus who decided the fate of the “bubble-boy”...

That turned king was enough to seal Vikenty Shegal’s fate and the remaining 13 players were guaranteed at least a min. cash of $17k.

Kristina Holst bust in 12th spot for the same cash, and the final table was set when Matthew Wantman fell in 10th place for $25,500, with Segio Aido’s exit in 8th spot ending day one.

On their return, PokerGO founder Cary Katz bust out first and then Ausmus continued his rungood by despatching Ferrero, this time with the kings rather than against them...

Jacky Wang also fell at the hands of Ausmus, 5th place worth $68k and he was followed to the rail by Anthony Hu. Leaving Ausmus, Schulman and Erik Seidel to battle for the podium spots.

Seidel couldn’t get past Ausmus either, though, Ausmus’ turned ace beating Seidel’s flopped kings to send the 62-year-old New Yorker out in 3rd for a $102k payday.

Heads-up was a good battle, a re-run of Ausmus vs Schulman from Sunday in a WSOP Online bracelet event, won by Ausmus.

Schulman couldn’t buck the trend in a live setting either, the winning hand playing out below...