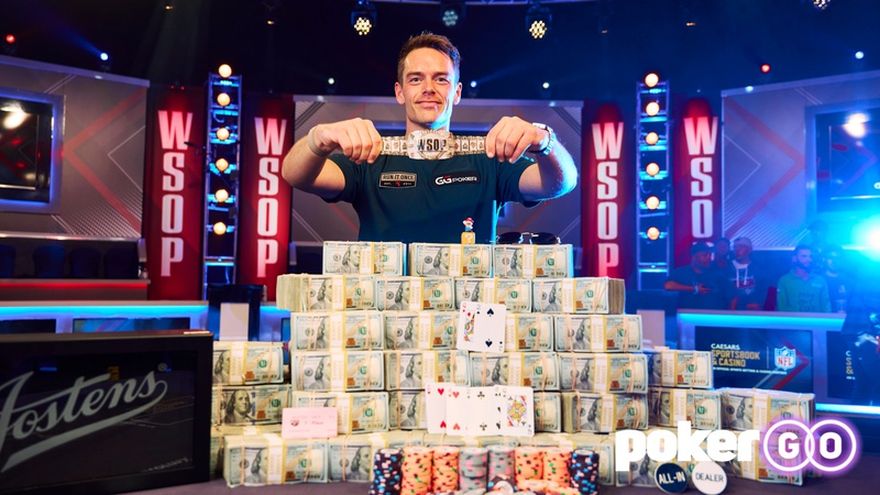 Espen Jorstad scooped the biggest prize in poker last night, taking the WSOP Main Event crown and $10million after seeing off more than 8600 other hopefuls over nine days of play in Las Vegas...

Jorstad was one of three players who returned to the felt yesterday to decide the destination of the most coveted gold bracelet, with Australia’s Adrian Attenborough and Argentina’s Michael Duek also vying for the $10million pot.

The trio had sewn up a minimum of $4million after surviving the first day of the final table, England’s John Eames busting out in 4th for a $3million to set the three-handed finale.

For Duek, coming in as the shortest stack with 25BBs compared to Jotstad’s 100BBs and Attenborough’s 50BBs, and looking to make a quick move, it wouldn’t last long. His hand was caught in the cookie jar early on in Paris & Bally's casino in Las Vegas...

That left the Norwegian Run It Once coach and the Aussie highstakes cash game specialist heads-up for the biggest title in the game, and it was a classic battle of mindgames.

A near-20-minute tank on the river by Attenborough when faced with an all-in must have been a record think without a clock being called...

Attenborough eventually found the fold, but the psychological damage was done and shortly afterwards he found himself in almost the exact same spot, with pretty much the same hand...

This is how the end looked in real time, Jorstad ecstatic as Attenborough called off the rest of his chips to hand the Norwegian the WSOP Main Event title and a monster $10million payday...

A jubilant Jorstad told the assembled reporters: that the first thing he did was call his mother, revealing: “She was crying and had trouble speaking. She's my biggest fan, so it was kind of emotional. It feels really good.”

Of his heads-up rival Attenborough, he stated “I just got better cards than him today.”

“My goal has been to reach into the High Roller scene and play more $25,000 tournaments and stuff like that. I've dipped my toes, but now I have a bigger bankroll to take some shots in those tournaments.”

He added: “I need to get in the lab and make sure I'm good enough to play them. And make some very sensible investments – cryptocurrencies and tech stocks, probably.”