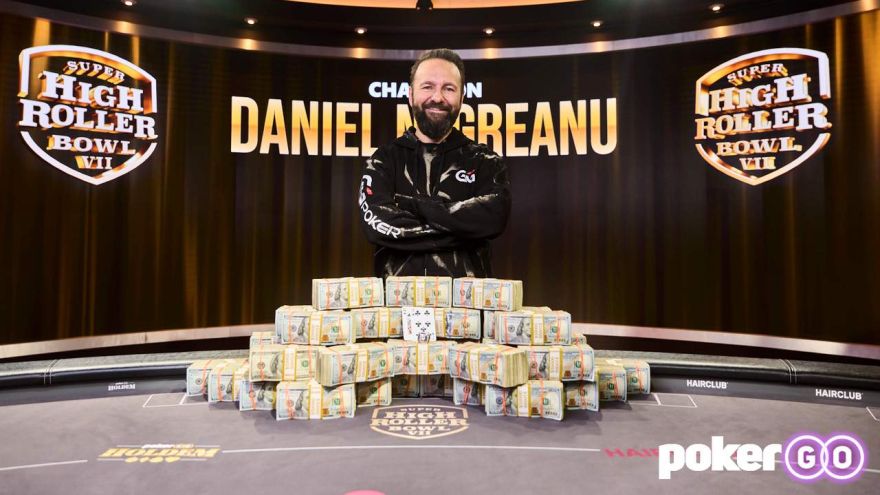 The 24 entries to the $300k per head buy-in produced a $7.2million prizepool, with only 4 spots paid and the action came thick and fast on day one.

Negreanu was heavily involved and the hand that saw Bryn Kenney ejected from the tournament was incredible...

Kenney wasn’t the only big-name player to fall, with Dan Smith bemoaning his regimented approach: “SHRB. Went 3 weeks without booze gearing up. This morning studied, meditated 2x, got my sunlight, delayed caffeine for 90 minutes, did cryotherapy. Draw the best table… and Out in 90 minutes. Next year just gonna snort a few lines and see what happens.”

Day two of the flagship tournament held in the PokerGO studios at the Aria saw more famous names fall, with Ben Tollerene, Jason Koon, Cary Katz, Mikita Badziakouski, and Alex Foxen all exit before the money.

When day 3 dawned, only five players remained, and one would be leaving empty-handed. With Bonomo, Lichtenberger, and Kisacikoglu all relatively short-stacked, it proved to be a nervy time for all concerned.

Eventually it was Turkish-born pro, Orpen Kisacikoglu, who bubbled, unable to get anything going when it really mattered...

Now guaranteed $720,000 Bonomo soon followed Kisacikoglu to the rail, leaving the remaining trio to play for what were basically $1million podium pay jumps.

SHRB newbie “LuckyChewy” Lichtenberger would have to settle for 3rd and $1,152,000 when he ran his short stack into a dominating Negreanu hand...

Heads-up between Negreanu and Petrangelo saw the latter double-up to survive, but DNegs eventually ground him back down and finished him off in the following hand:

“I'll tell you what, heads up, I went through that crazy streak where I lost so many and I think I've won five straight heads-up matches in tournaments when I've got there,” Negreanu said afterwards.

“Obviously it feels great. The last two years have been really, really difficult mentally because I know my game is better than ever. But who cares? The public looks at it like, 'No, no, no, Daniel. You've got to look at your results. Your results are no good. You're playing bad.' I know how I'm losing. I've been doing this for 30 years. I know when it's me. I know when it's me making mistakes, and it isn't. I played a pretty close-to-flawless Super High Roller Bowl here and luckily the structure is so deep that it's not just a shove fest. If you play deep structures all the time, I'm going to be one of the favorites each and every time.”

The last word goes to Daniel’s wife, Amanda, who may have a shopping trip in mind following the monster win...