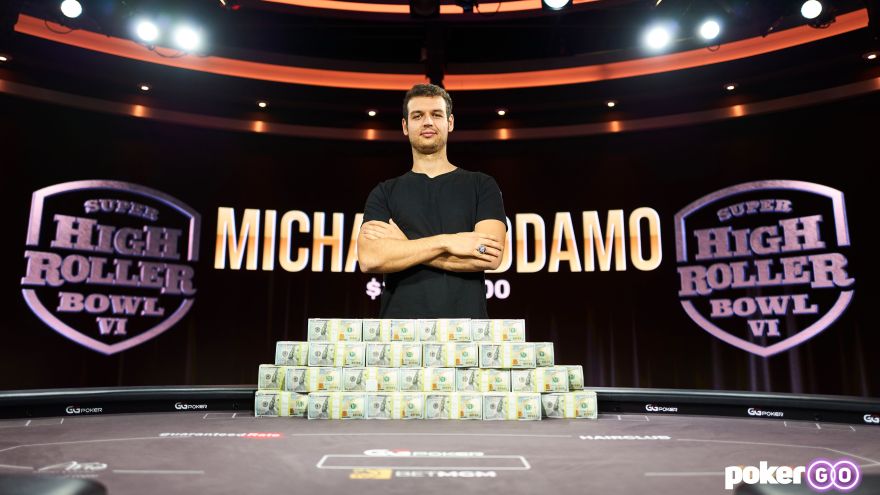 The 27-year-old Melbourne pro was one of 21 entries to the $300,000 buy-in event, the 6th edition of the SHRB having a prizepool of $6.3million, but only the top 3 spots seeing any return on their huge investment.

Daniel Negreanu wasn’t going to be one of them after he bowed out early on day one, the first casualty of the tournament courtesy of Addamo flopping a straight against DNegs’ top pair, top kicker.

More of the lpoker world’s biggest names joined Daniel on the rail, with Ali Imsirovic, Stephen Chidwick, Jason Koon, David Peters, and Bryn Kenney all failing to bag at the end of day one.

Bill Klein went out in style in 6th spot, triple-barreling Addamo, who used all his time bank chips and shook his head several times at being put in such a tough spot for his tournament life.

Addamo finally found the call on the river to despatch Klein and that gave him a big chip lead for the final table, although the opposition was as tough as it gets: Alex Foxen, Justin Bonomo, Sean Winter and Chris Brewer also with their eyes on the prize, a $3.4million payday.

It wouldn’t be Foxen’s day, however, losing out to Bonomo and falling in 5th spot, short of the paid spots. The extra bad news for Foxen is that he is unlikely to be playing the WSOP that kicks off today because of his anti-vaxx stance, something he shares with fiancée Kristen Bicknell as we reported here.

With four players left, it was the biggest money bubble of the year, and for Chris Brwer it was painful one, picking up a big hand as Bonomo tried to bully the shorter stacks...

That rivered flush sent Brewer home empty-handed, and meant Bonomo, Addamo and Sean Winter had locked up $1million plus change, the pay jumps now close to $900k for 2nd and then $1.5million more for first.

Third spot was as far as Winter would go, his excellent and lucrative run ended when the Aussie-on-a-heater, Addamo, turned a Broadway straight to topple pocket tens.

That left Addamo and Bonomo to fight it out for the title, and the Super High Roller Bowl title and $millions were decided by a brutal cooler...

Addamo called Bonomo’s raise and they went to the flop...

Check, check was followed by the turn...

...and there was only likely to be one way this ended when Addamo’s overbet was called and the river fell...

Bonomo, now holding top two, tanked after Addamo’s shove, but like Negreanu on the very first bustout of the event, he simply couldn’t find a fold.

Addamo had emerged from one of the toughest fields to take down the Super High Roller Bowl IV title and a $3.4million payout.

It continued his incredible run that saw him win the final two events of the recent Poker Masters, worth a combined $1.84million, and don the Purple Jacket as the overall Series winner.


He told PokerGO reporters after his win last night that his triple-whammy was “a one-in-a-million chance or something ridiculous.”

He added of his heads-up victory over old foe Bonomo, who pipped him to the 2020 SHRB title: “I’d say I’m a very competitive person, so I was definitely trying my best and battling hard. It was good to get the win, but it was pretty lucky in the end with flush versus two pair.”