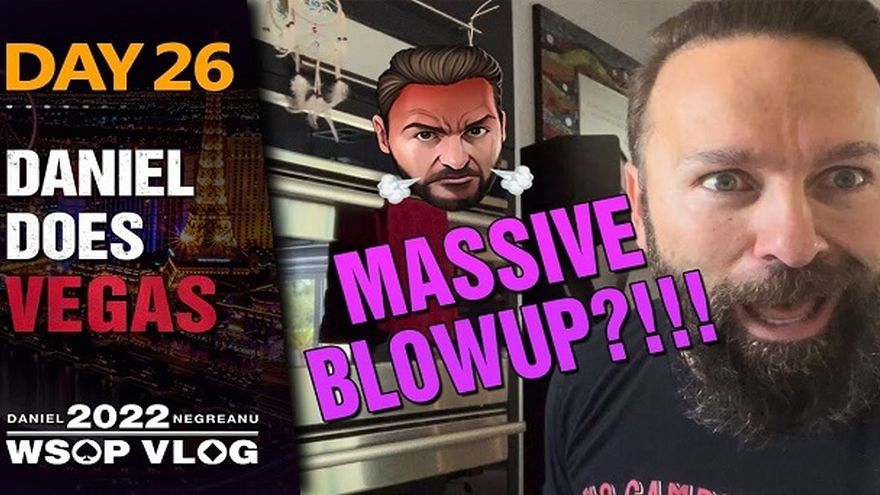 Daniel Negreanu is never far from the headlines and this week it was a tantrum in the Super High Roller that led to him being the talk of Vegas once again – Kid Poker smashing his vlogging equipment after busting out of the $250k buy-in event...

When his pocket 10s failed to hold up against David Peters, it meant a two-bullet, $500k investment down the tubes for DNegs, and that might make even the most mellow of poker players lose the plot.

As @VegasHayls tweeted: “Everyone freaking out about Negreanu bust hand where he slams table & throws camera but let’s not forget it was a $250k buy in… I’ve literally ripped cards out of anger & threatened to fight someone in the Orleans parking lot in a $150 nightly lmao poker is an emotional game.”

Bill Perkins wrote: “It seems very human and relatable. He expressed frustration about a beat by smashing up his stuff. He did not even say an unkind word to anyone. Poker is an emotional game, we shouldn't have to bottle up our emotions and act like robots all the time.”

However, Daniel’s outburst had Justin Bonomo fearing for, well, almost everyone, but women in particular it seems...

Why aren’t there more women in poker?

Maybe it’s because 36% of (mostly male) poker players don’t give one single fuck about what makes 50% of women feel unsafe 🧐 pic.twitter.com/pN6Qf74h6V

Not everyone agreed with Bonomo, a poll he ran showing 55% of respondents saying Daniel’s behaviour wasn’t great but “not a big deal”, although 20% found it “pathetic and sad” and 14.5% voted “violent and unacceptable”.

David Peters himself found Bonomo’s take unjustified, if not ludicrous, while Liv Boeree described it as “fucking demeaning” adding, “Yes he behaved like a child and should know better but “making women feel unsafe” – talk about clutching at straws to fit a narrative.”

Of course, Daniel can’t compete with Phil Hellmuth in the outburst stakes, but there is a violent edge to Kid Poker when he goes off the deep end, as witnessed back in 2020 when someone dissed his wife in TwitchTV chat...

Daniel’s expletive-laden rant continued: “Come fucking step to me and say that and I will knock you the fuck out. How about that? I will break your fucking teeth if you come step to me and I will feed them to you anally.”

That tirade led to a one-month ban from Twitch for Daniel...

...although it generally takes more than that for the WSOP to take action against a well-known player, with Phil Hellmuth getting away with almost every kind of insult over the years.

Meanwhile, Daniel’s daily vlog revealed his own take on what happened, and he couldn’t believe the fuss being made about it...

The incident did provide some excellent material for Thomas Keeling to produce yet another incredible video montage of Daniel, and we’ll leave you with that as a parting shot...