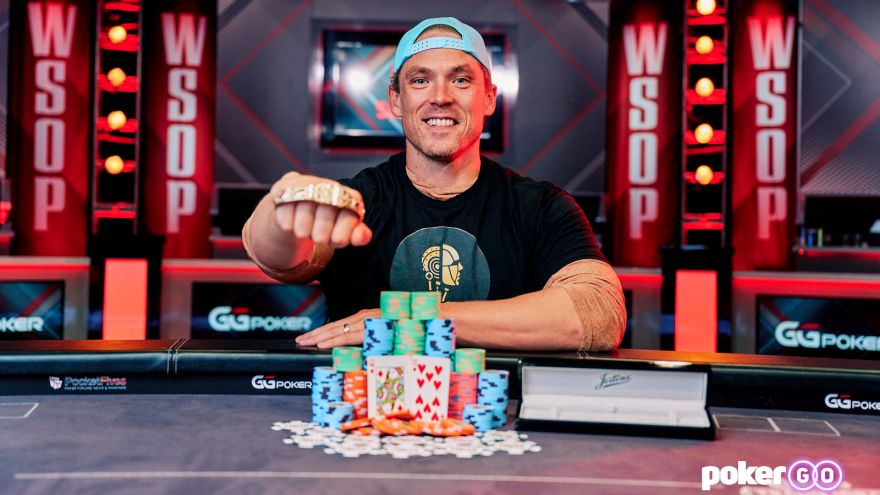 Alex Foxen bagged his first-ever WSOP gold bracelet, taking down the $250k buy-in Super High Roller for a monster $4,563,700 payday and finally getting the “monkey” off his back...

Thanks for all the nice words. This was a super fun tournament from start to finish. It was well worth the wait to get bracelet #1 in this one. Couldn’t do it without my two favorite beings pic.twitter.com/c6XNkGN5Ck

The Foxen household already has three WSOP bracelets courtesy of Alex’s wife, Kristen Bicknell Foxen, but there would be no easy ride to gold in the $250k, the biggest names in the game all looking for glory.

With 56 entries, the prizepool sat at just shy of $14million, and day one saw some big casualties, alleged cheats Ali Imsirovic and Jake Schindler among the first to bust out.

The likes of Daniel Negreanu, Bryn Kenney and Jason Koon all advanced to day two, but for DNegs it was to be a controversial end to his tournament.

Busting out to David Peters hitting a river-river flush, DNegs slammed his vlogging gear on the table then smashed them off a wall...

“I think he lost” 😂 pic.twitter.com/hfJGz0O4iu

...which naturally led to a Twitter spat involving all and sundry about Daniel’s behaviour.

Back at the tables, however, Alex Foxen was steadily building his stack, ending the day where started, in the chip lead.

Day three dawned and 8 players were in with a chance of the title, though Dan Zack fell swiftly to Foxen, who was wielding Negreanu’s losing hand...

Phil Ivey was searching for his 11th piece of WSOP gold jewellery, coming a close second in the $100k high Roller last week and making the final table of the $250k, but it wasn’t to be as he fell in 7th spot to Brandon Steven.

The always voluble Martin Kabrhel departed in 6th and Sam Soverel fell in 5th, another two victims of Stevens’ hot streak, with Soverel taking the first of five $million+ payouts.

Hunichen disposed of Mateos in 4th but then ran into Foxen, who smashed the turn and faded sixteen outs on the river...

The left Foxen heads-up against Brandon Steven, who was also chasing his first piece of WSOP hardware but was staring at a 9:1 chip deficit.

The final hand showed that nothing was going to stand in the way of Foxen breaking his WSOP duck, all the chips going in on the flop...

A bigger two pair for Foxen and one gold bracelet plus a massive chunk of cash, with Steven taking a career best $2,820,581 payday.

“It really means a lot to me. It’s kind of been a monkey on the back,” said Foxen afterwards, adding: “I’ve always wanted a bracelet. I’ve had some close spots and always been disappointed.”

Foxen also paid tribute to his wife, Kristen, stating: “I’m extremely lucky I have an incredible wife and incredible support.

“It’s something that can’t be overstated honestly, the amount it helps to have someone at home that to the utmost extent understands what I’m going through on a day-to-day basis and is there to talk hands all the time, and just to help me through the difficult times too, because. I’m definitely not immune to tilt and emotion. Having someone like Krissy, I can’t express how lucky I am.”