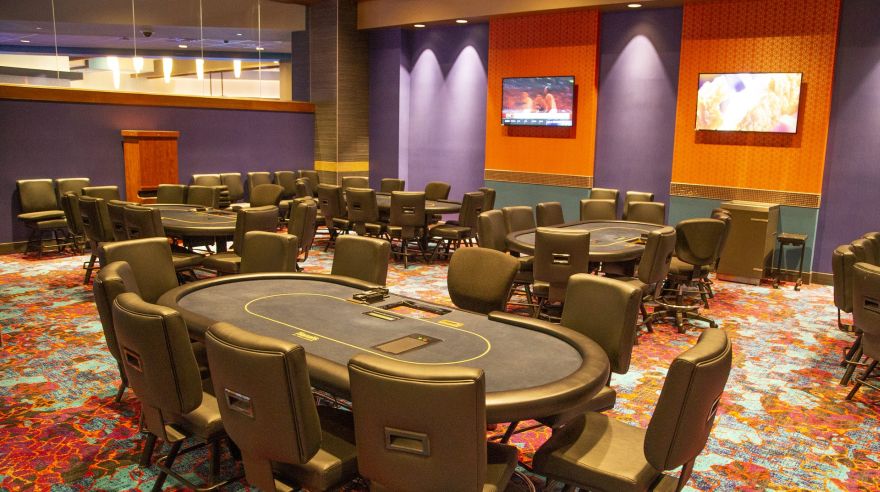 The fortunes of bricks and mortar casino poker-rooms dominate the industry headlines this week, with re-openings, closures, facemask rules, seating numbers and revenues making for a mixed bag…

We’ll start with some gloomy news for fans of Harrah’s, the Caesars-owned cardroom closing its doors for the final time and being transformed into a slots room.

With just 7 tables it was one of Vegas’ smallest poker-rooms, but its death brings the Vegas total down to 30 cardrooms, of which five are Caesars-branded – at Bally’s, Caesars Palace, Flamingo, Planet Hollywood, and Rio.

CardsChat report poker pro Ben Abrahams as saying: “They should have shut down a while ago. The only time they made money was during WSOP.”

The number of cardrooms that have re-opened now totals 14, almost 50% of the state’s total, and of those there are six rooms who have already managed to offer 8-handed tables.

As we reported previously, the Nevada Gaming Control Board initially only allowed 4-handed play when casinos were first allowed to re-open, but that quickly changed when a mask-wearing policy was enforced.

Among the casinos to offer 8-handed play are the Venetian and Red Rock Resort, the Aria and Bellagio still at 6-handed and the Wynn and Rio still to re-open.

The Covid-19 lockdown in the UK has seen casinos left until among the last businesses to re-open, with each nation having different rules.

England have re-opened their cardrooms first, and it has seen a mix of plexiglass screens, masks, chip cleaning and other rules introduced.

Dusk Till Dawn in Nottingham, Rob Yong’s casino, is yet to re-open, but the famous Grosvenor Victoria in London has restarted cash games.

Masks are advisable though not mandatory at double EPT winner Victoria Coren-Mitchell’s favourite haunt, but there are plexiglass dividers between players.

Moving on to financial matters in the gambling world, and painful news for one Pennsylvania casino operator.

Greenwood Gaming and Entertainment Inc., who own the Parx Casino, have been trying to recoup $1.1million in overpaid taxes.

The company had already lost at least one court battle, and this time the Pennsylvania Supreme Court upheld previous rulings that the casino operator had missed the 3-year deadline to file for a refund by 6 months.

The state government is also reported to have lost out on some $424million in gaming taxes due to the recent lockdown, Pennsylvannia having the highest tax levy in the USA for gaming.

Held virtually, the awards ceremony saw PokerStars win against the likes of the Kindred Group and the Betsson Group.

Rebecca McAdam Willetts, PokerStars’ Public Relations, said: “Building new products that are fresh and entertaining for our community is of utmost priority at PokerStars…we’re extremely pleased to have won two awards in this area across our offering.”

News that partypoker’s parent company, GVC Holdings, reported total net gaming revenue of £1.62 billion for the first half of 2020, includes the online poker room coming in as best performing product.

Although overall GVC profits for the company were down 10% year-on-year, partypoker revenues grew by 60%, offsetting much of the losses elsewhere.