The Sporting Accomplishments of Poker’s Finest

If you are a poker Twitter fan and follow the biggest names, you’ll notice that almost every poker pro follows sports 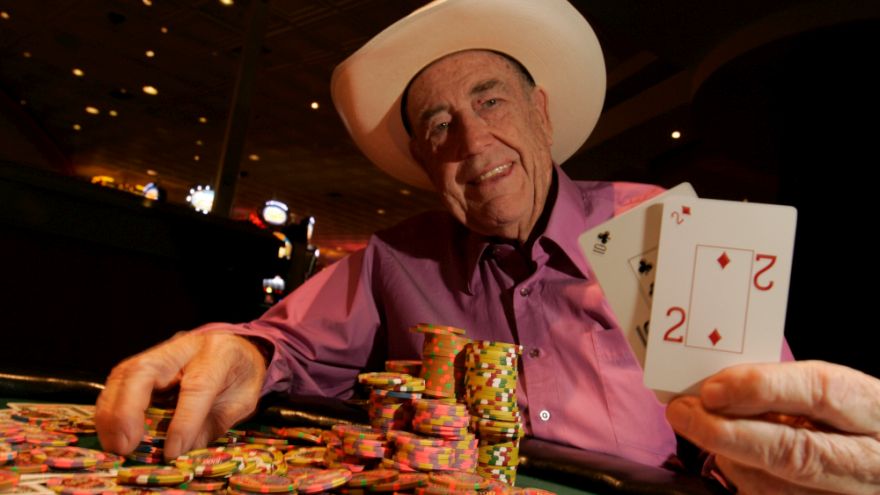 If you are a poker Twitter fan and follow the biggest names, you’ll notice that almost every poker pro follows sports, but do you know which of the top stars are actually any good at them? Read on to find out!

We’ll kick off with the granddaddy of poker, Doyle Texas Dolly Brunson, who had a promising basketball career cut short by injury, which was of course poker’s gain.

Brunson won a scholarship to Hardin-Simmons University in Texas where he averaged 15.3 points per game as a junior in 1953, but the following year saw him shatter his leg in an accident and that was that.

He was, however, inducted into the Big Country Athletic Hall of Fame in 2017 in recognition of his basketball prowess, Brunson stating he was “very honored because it's from Texas."

Phil Hellmuth looks like one of the least athletic poker pros you’re ever likely to come across, but if you bet on sports and poker at all, you’re probably well aware of his incredible basketball prop bet with Doug Polk.

That saw the Poker Brat accept 10-1 odds from Polk that “he couldn't make a 3-pointer on a basketball court” and his own $1k was safe as houses when he sank the late-night throw at the first attempt!

Hellmuth won’t be making the NBA anytime soon, but his love for the game saw him jetting off mid-WSOP to catch his favourite team, the Golden State Warriors, in the finals, before returning quickly for some more bracelet action in Vegas.

Boxing and MMA have both been favourites among poker players for settling disputes, or just for a fun wager, but you’d be hard pushed to find two less likely candidates for the ring than Antonio Esfandiari and poker fanatic comedian Kevin Hart.

That didn’t stop the duo from duking it out for three 3-minute rounds for a prop bet that saw ‘the Magician’ edge a points victory over his movie and stage star friend.

“To all boxers we are not fighters and don’t want to be,” Hart shared on Instagram afterwards, adding: “This was a challenge between 2 friends that had a great time and put on a hell of a show! We have so much respect for this sport...You guys are amazing!”

A rather more serious match-up saw Olivier Busquet take on fellow poker pro JC Alvarado back in 2016, the octagon the venue of choice to settle a $150,000 bet.

Alvarado was by far the smaller man, but with a background in mixed martial arts. Unfortunately it wasn’t enough to prevent Busquet from delivering a pounding, and it was the 22 pounds weight advantage that took its toll.

“I have so much respect for JC. He is so tough,” said Busquet of his opponent, adding: “If the situation was reversed I might have given up way before he did.”

The most recent poker pro sporting connection was revealed just this week, with partypoker ambassador Jason Koon involved in a potential $2million bet that would see him have to do the 100m sprint in under 11 seconds.

A former college athlete who regularly ducked under that mark a decade and a half ago, Koon has been given a year to recreate his youthful best, with Bill Perkins offering him a $100k freeroll to get started.

The bigger bet is unlikely to happen, but Koon says he will have to avoid injury if he is to stand any chance of getting close to his personal best of 10.7 seconds.