The poker appeared in the mid-19th century and with online gaming proliferation, the poker popularity is at its peak and has become a highly attractive form of entertainment 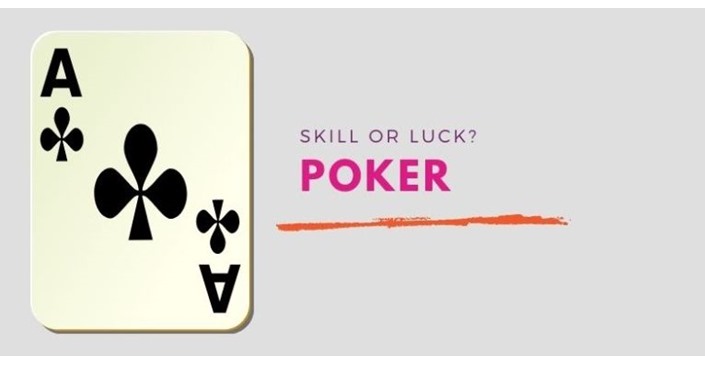 The poker appeared in the mid-19th century and with online gaming proliferation, the poker popularity is at its peak and has become a highly attractive form of entertainment. Many poker variations can be played today but the most popular include Stud poker, Draw poker, Texas Hold’Em, and Community card poker.

Millions of amateur and professional players from around the world are competing on CasinoDeps poker websites using cash or just joining offline tournaments in their cities. Researchers declared to have created an unbeatable poker-playing computer program. Therefore, the players wonder whether poker is a game of skill or luck. According to the old saying, poker is 90 percent skill but requires 10 percent luck. So, this old expression is still in the long run?

The most accepted story about poker is that this game is a combination of a French parlour game and the British game Brag. Since its appearance in America in the 1800s, Poker has become popular and had been played in New Orleans and Louisiana before it became an official game in the United States. At that time, no standardized rules actually existed when playing poker, so cheating was common. Throughout history, several variants of poker have entertained the players but the official early poker variations included draw poker, five-card draw, five-card stud, and seven-card stud.

In the 1990s, watching poker in real life was not very interesting as you have to follow the cards and chips moving around the table. Nonetheless, when Channel 4 broadcast "Late Night Poker" programme in 1999, the game has risen in popularity since they improved the way the viewers could see the game. As a matter of fact, they introduced cameras under the table enabling the audience to see the cards and to be more concentrated on the game. Moreover, the televised tournaments raised and this growth is associated with the poker websites popularity. Online poker has reached a major reputation in the world as people became interested in this game. With the increase of televised tournaments, the issues to classify poker as a game of chance or game of skill came up which also came with the status of poker.

Is Poker a Game of Chance?

A study in the Journal of Gambling Studies published in 2012 confirmed that poker is a game of chance. This experience aimed to prove whether poker is a game of skill or chance. In the experience, 300 participants were divided into two groups, “expert” versus “non-expert”. The experience depended on whether they were interested in poker or not. Then, they played 60 hands of Texas Hold’em with fixed deals so the players were able to continuously get bad, good, or neutral hands.

At the end of the experience, the researchers learnt that the final amounts of money the experts gained were not different from the non-expert players. Despite the experts' application of skill level, the skills did not impact their winnings. Hence, they argued that poker is a game of luck.

Counterfactual Regret Minimisation or CFR is a new computer algorithm to solve one of the poker variations called heads-up limit Texas Hold’em. This algorithm approaches a Nash equilibrium that works by repeatedly playing against itself while reducing regret. In fact, regret is a numeric value describing how much a player regrets his decision. This can be negative, positive, or zero. For positive regret, it indicates that the player prefers to take different decisions. Concerning the negative regret, it implies that the player is happy with his or her decision.

As for zero regrets, it indicates that the player is indifferent. Furthermore, Cepheus is also another poker-playing program that was developed by the Computer Poker Research Group (CPRG) at the University of Alberta. This scheme essentially weakly solved the poker variant heads-up limit Texas Hold’em. Introduced in 2015, the strategy of Cepheus is very close to a Nash equilibrium scheme for the poker variation heads-up limit Texas Hold'em. Despite a negative view about Cepheus, this program is effective since the researchers are able to develop an algorithm enabling the players to solve poker game. Nonetheless, that's not to say that luck doesn't play a part in poker. To answer the question, poker is both a game of chance and skill provided that Cepheus and CFR can be developed clearly.