Doug Polk has challenged Phil Hellmuth to a highstakes heads-up match, and is offering the Poker Brat a monster $1million against zero side-bet to sweeten the proposal... 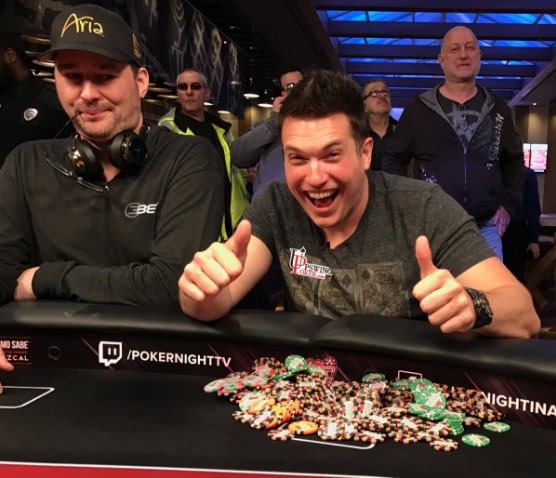 Doug Polk has challenged Phil Hellmuth to a highstakes heads-up match, and is offering the Poker Brat a monster $1million against zero side-bet to sweeten the proposal...

The surprising offer from the self-styled “retired” HUNL expert came in the week that Hellmuth downed Daniel Negreanu for the second time in their HighStakes Duel, cementing his claims to be an “apex predator” of the heads-up poker world.

Hellmuth’s victory was his fifth in a row in the SNG-style format played live at the PokerGO studios in Las Vegas, having already defeated Antonio The Magician Esfandiari 3-0 for a $350,000 payday.

Negreau had already said he’ll be using his rematch clause to play Hellmuth, this time the stakes bumped up to $200k apiece, with DNegs having to win, otherwise big Phil can ride off into the sunset with another $350k.

Polk also defeated Negreanu earlier this year, winning $1.2 million in their Grudge Match of the Century, and obviously feels that the same match-up against Hellmuth will be a walk in the park, the “offensive” $1million offer unlikely to be accepted.

That’s because Hellmuth’s “white magic” approach to the game involves the live reading of opponents, whereas multi-tabling online at the highest level requires a completely different approach.

Daniel Negreanu, despite diving into the depths of GTO poker in preparation for and during his Polk match, couldn’t match Polk’s obvious superiority in that respect, and Hellmuth is unlikely to even try.

The $1million “carrot” is a side-bet rather than a bb/100 headstart, as he clarified when Bill Perkins asked the question...

That referred to Perkins’ upcoming battle with young upstart Landon Tice, their Heads-up Battle for Souls seeing Perkins getting 9bb/100, with an additional $200k sidebet on the table.

Perkins’ preparation for that match saw him lose a whopping $250,000 in just a few hours against none other than Doug Polk, and he’ll have to up his game to survive against Tice.

Back to Hellmuth and a reply to Polk’s challenge hasn’t officially been announced, but the following “duet” between the pair on Twitter seems to contain the answer...

While both Polk and Hellmuth can justifiably claim that heads-up poker has proved to be a very lucrative hunting ground, poor Daniel Negreanu has been left to defend himself against an old foe pointing out his rather obvious failings in that particular area.

Irish pro David K. Lappin described how “over the course of 18 three-handed encounters, Negreanu had won zero,” adding that he nevertheless, “...despite ten consecutive losses heads-up, Negreanu accepted a challenge from a specialist in that format, Doug Polk.”

We all know how that ended, and although he’ll have the chance soon enough to finally put a stop to his losing “streak” with a third battle against Hellmuth, perhaps the clever money will finally start to reflect that record.