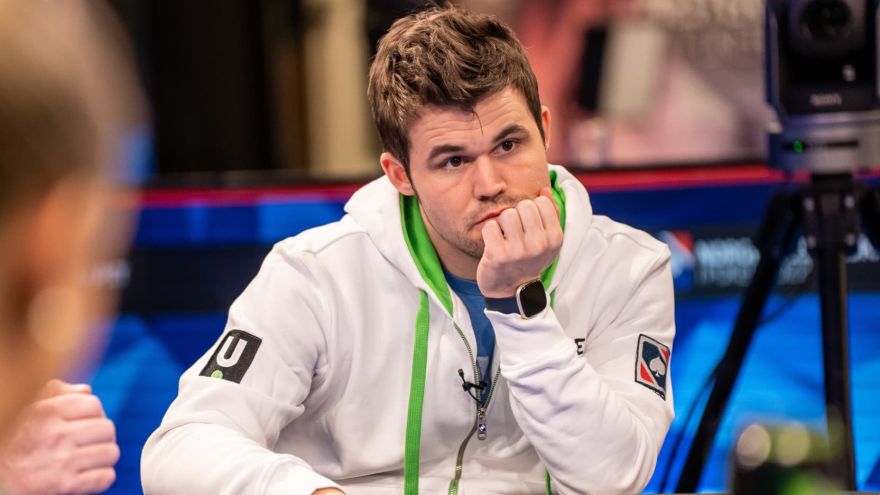 World Chess Champion Magnus Carlsen swapped the 64 black-and-white squares for the green felt this week, a deep run in the Norwegian Championships Main Event showing his prowess and potential at poker...

Day 3 in the Norwegian Poker Championship. 60 of 1050 players left. Still grinding and in the money🃏💚 pic.twitter.com/iACgZhmlJ3

The 31-year-old Norwegian, who became world chess champion in 2013 by defeating India’s Vishy Anand and has since defended his title 4 times, was looking to add a poker title to his incredible accomplishments over the chess board.

Already a multi-millionaire from his chess exploits, the actual money wasn’t the main aim for Carlsen, who kept his followers updated on his progress via Twitter.

Fellow chess player, Lawrence Trent, was among those impressed with the Norwegian’s poker skills, giving away the world champion’s favourite poker hand...

40 left in the Norwegian Poker Championships & @MagnusCarlsen has a decent stack. I've played a lot of poker with Magnus and can confidently say: 1)if wanted to be a world class player, he could (easily) 2) Careful when he has the 62o he loves 5 bet jamming this bag o'crap #poker

His deep run at the event held in Dublin, Ireland, due to Norway’s strict laws around poker, came to an end in 25th spot, good enough for a €5k cash in the €880 buy-in tournament, although Hendon mob has yet to update the results and give Carlsen his first flag.

Thats it for me. Finished 25th🙋‍♂️

Poker and chess have long been bedfellows in the world of competitive strategy games, many of the attributes and skills necessary for both seeing a crossover between the games.

Jennifer Shahade, a two-time women’s US Championship winner at chess as well as a PokerStars poker pro, is one of the best-known for her skill at both games.

Though Carlsen would be a firm favourite to beat her at chess, the man considered by many to be the chess G.O.A.T. still has some way to go to match her $350k live tournament earnings in poker.

Among other players to excel at both games are Ylon Schwartz, who gained the FM title at chess and took down 4th place at the WSOP Main Event in 2008. That was the year Peter Eastgate won, and Schwartz’s $3,794,974 contributed hugely to his total career earnings of just over $5million.

Schwartz said: “A lot of people are broke playing chess. And they all have a background in analysis and studying, so it makes a lot of sense to make the move to poker to actually make some money."

Among those who made the transition early on were Dan “Action Dan” Harrington, Dan “Cowboy Dan” Smith and Mike “Timex” McDonald, who all have strong chess skills in their pre-poker past, while Daniel Negreanu and Bill Perkins are among the poker players who have discovered the joys of chess in recent years.

One of Magnus Carlsen’s closest rivals in the world of chess, multiple US Champion Hikaru Nakamura, is another serious fan of poker. Nakamura even took on a brand ambassador role for Choker, a game that combines elements of both games.

Meanwhile, it’s back to the day job of crushing the chess world for Magnus, who is a whopping 60 Elo points ahead of his nearest rival in the world rankings. With a further 60 points covering the next dozen players, it shows just how far ahead of the field Carlsen is.

If, or when, he retires from competitive chess, there’s a decent chance he’ll take his poker more seriously. Something to look forward to for chess and poker fans perhaps.