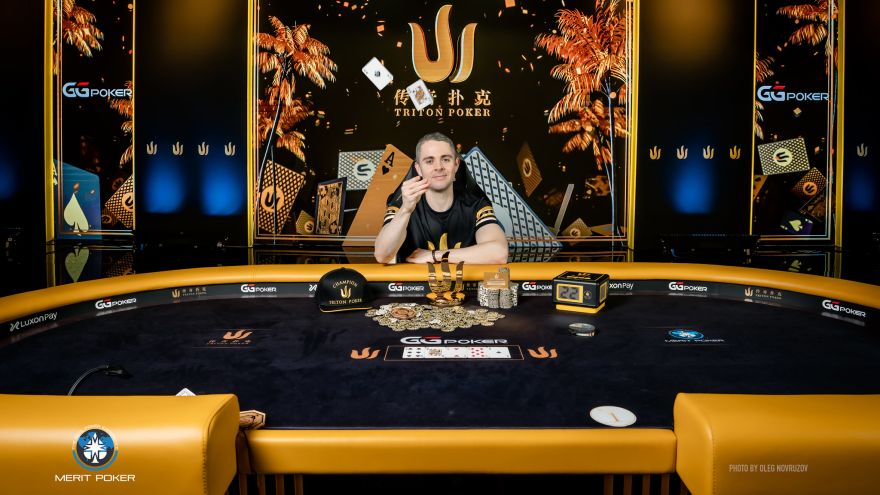 Tollerene, perhaps better known by some for his highstakes online exploits under the nickname Ben86, was persuaded to try his hand at the Triton SHR series by his good friend and Triton ambassador, Jason Koon.

Having taken an extended break from the game, Tollerene wasn’t expecting too much, facing a tough field of 77 players producing 123 entries and a $3,698,100 prizepool.

With 17 paid, it was Pieter Aerts who left empty-handed after a thrilling bubble period that saw Koon and WSOP Main Event champ Espen Jorstad both survive.

Neither would make it to the final table, though, with Paul Phua, Artur Martirosyan and Sam Greenwood also falling before the last six.

The ensued a period of short stack double-ups before the dam finally broke, with Chavero’s exit followed by Fedor Holz, who ran K♥ J♦ into Tollerene’s K♦ Q♠ to leave in 5th spot and a $272,300 payday.

Alex Keating, another Triton debutante, was next to bust after running Kx into Ax two hands running, leaving Chidwick, Tollerene and Brazil’s Yuri Dzivielevski to fight it out.

Chidwick, currently sitting atop the Triton Poker Player of the Year leaderboard, tried to bluff his way through the Brazilian and came unstuck.

The final hand saw Tollerene trap-limp from the small blind, his opponent checking...

...and the same betting pattern followed...

...and the river was impossible for Dzivielevski to get away from, Tollerene’s better two pair winning him the title.

“I’m very tired,” Tollerene revealed in his winner’s interview. “I was sort of stressed because I haven’t played poker in a while and I was struggling to remember everything.”

The 15-event Triton Poker SHR series continues today with day two of the $50k buy-in 6-handed NLHE, event 3 on the schedule, with the $200k buy-in Coin Rivet Invitational to look forward to this weekend.