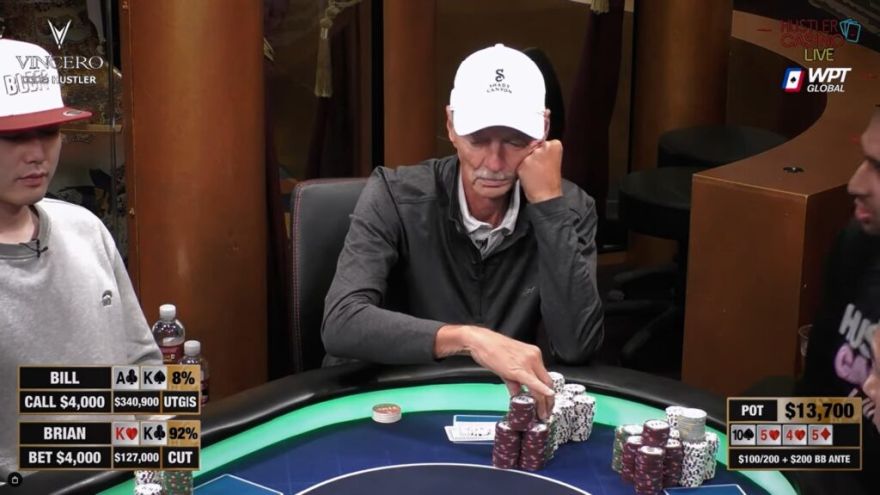 Arguably one of the best bluffs you'll ever see occurred at the Hustler Casino Live high stakes cash game when Bill Klein got Brian Kim to fold with fives full of kings - which would have been the winning hand.

The bluff was successful due to the table image of Klein, known by all to be a tight and shrewd competitor on the felt. Klein's style of play is responsible for $6,131,274 in tournament earnings and countless more on the big money cash game tables.

Both combatants were flush with cash after each made deep runs on the tournament trail last month. Klein landed 4th in the $25K Aria High Roller for $57,500, while Kim recently finished in the same position in the $10K WPT Five Diamond World Poker Classic for $377,000.

We pick up the high stakes cash game action at HCL with Kim holding a pair of kings and raising to $1,000 from the cut-off. In straddle position, Klein made the call with AK offsuit.

It was Kim's turn to go into the tank, mulling over his options while up against Klein's huge bankroll and tight image. After a couple of minutes, he announced his decision:

"I fold only because I have no more money," he said.

Klein slyly showed his AK and scooped the $190,700 pot, his tablemates in awe over the bluff he pulled off, while a stunned Kim buried his head in his hands. Watch the hand in its entirety below: