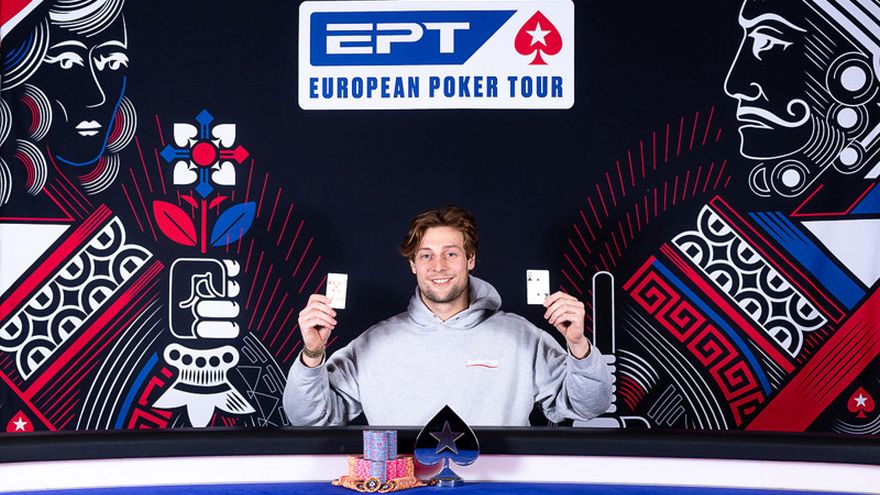 The King’s Casino at Prague Hilton saw 27 players pay a total of 35 buy-ins to create a prizefund of €840,350, and it was a truly international, star-studded field.

Late entries from Lithuania’s Antanas “Tony G” Guoga and the casino owner himself, Leon “Loose Leon” Tsoukernik added some extra flavour to the tournament, as did the US trio of Zhuang Ruan, Chris Brewer and Nick Petrangelo.

It was a fast and furious chase for the six paid spots, Spain’s Juan Pardo delivering a double KO in the following hand to speed things along...

The hand saw a curious situation pre-flop, one that is useful to remember. Seiji Raised UTG and Nemeth jammed the button. While Pardo was considering his BB action, Seiji called off with his remaining 170k chips – but out of turn. That gave Pardo a choice – shove or call (or fold of course).

A call would see Seiji all-in, but a raise would give Seiji the option of folding. Pardo naturally just called with his Big Slick and was rewarded by the run out...

A short while later, Thomas Muehlocker would be the unlucky money-bubble victim, leaving the short stacks in the money fighting for survival.

Schemion survived by folding his big blind and watched in glee as Nick Petrangelo fell next hand, a €58,830 for Petrangelo and €17k or so more for Schemion who hit the rail shortly afterwards.

Zhuang Ruan, who was at the centre of an online cheating scandal last year for using Real Time Assistance (RTA) and is more generally noted for his lack of poker ethics was KO’d in 4th when Pardo produced pocket sixes against Ruan’s fives.

Pardo then dispatched Germany’s Leonard Maue in 3rd for €126,050, leaving himself heads-up against Meulder for the title. The duo decided to play for half an hour, after which an ICM chop was agreed and they blind-flipped for the trophy.

Each player exposed one of their hole cards...

...then ran the flop and turn, Pardo ahead with his high card jack.

However, when they revealed their second hole cards before the river, Meulder leapfrogged his rival...

The river couldn’t help the Spaniard...

...and the EPT Prague €25k Single Day HighRoller title and trophy went to the Dutchman.

The PokerStars Prague EPT stop sees the Main Event kick off today and we’ll have all the best of the action from this and many other tournaments for you right here on HighStakesDB.