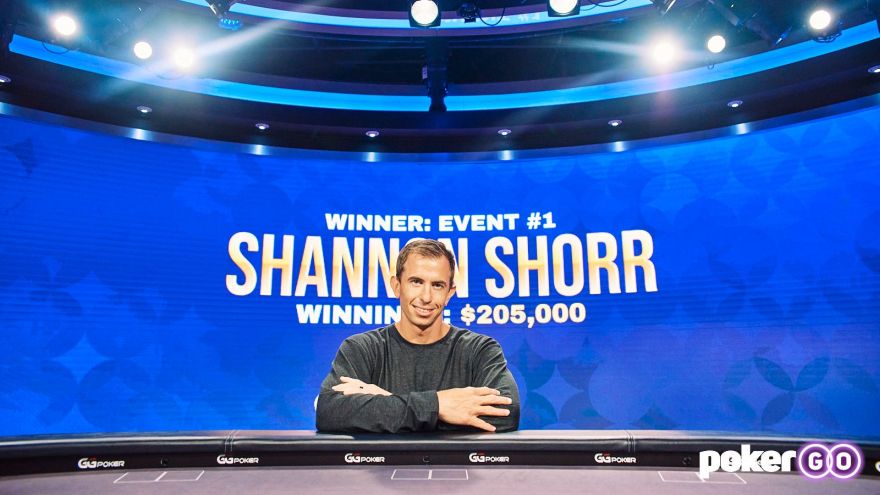 Shannon Shorr took down the opening event of the 2021 Poker Masters Series, scooping the trophy and $205,000 top prize and crediting soon-to-be fatherhood as the chief motivation behind his recent successes.

Shorr was among a field of 82 entries to the $10k buy-in NLHE event 1 that kicked off the Poker Masters Series, the players chasing the coveted Purple Jacket awarded to the overall winner.

Ali Imsirovic won that in 2018 but busted on day 1 this week, as did the 2019 winner Sam Soverel, with 2020 overall victor Alexandros Kolonias not playing.

Daniel Negreanu, Erik Seidel, Jake Schindler, Stephen Chidwick and a host of other big names also failed to make day two, but David Peters was there representing the elite of the highroller circuit.

There were 12 paid spots and by the start of day 2 only 7 players remained but Shorr quickly reduced that to just 5 by dispatching Yu and O’Riordan.

Jonathan Jaffe lost a race to Brock Wilson to exit in 5th spot and then Wilson self-destructed somewhat by running a small ace into David Peters’ pocket kings, losing the rest of his chips soon afterwards.

Peters was the recipient of another present when Dylan Destefano shoved 20 big blinds into him, only to receive the bad news...

That left Peters and Shorr heads-up, with Shorr explaining afterwards to PokerGO reporters: “David’s been a career-long friend of mine. We’ve traveled everywhere and always joked about getting heads up, but this is the first time it’s ever happened.”

The pair battled for quite a while, but with registration for event 2 about to close (the events overlap with day 1 of the next event playing while day 2 of the previous event takes place) they decided it was time to flip or be damned.

“The crazy thing is we got heads up, chopped, and then we were playing for a little bit more money but then we had to get all in in time to play [the next tournament],” Shorr explained.

That was enough for Shorr to take the win and both men hurried off to register for the second event, another $10k NLHE.

Shorr explained afterwards that he had put in a lot of study and online play during the pandemic, adding: “I’m having my first kid around Thanksgiving and that just has really tunneled me and motivated me to put me in this really awesome space where I just want to do all the right things and make some money.”