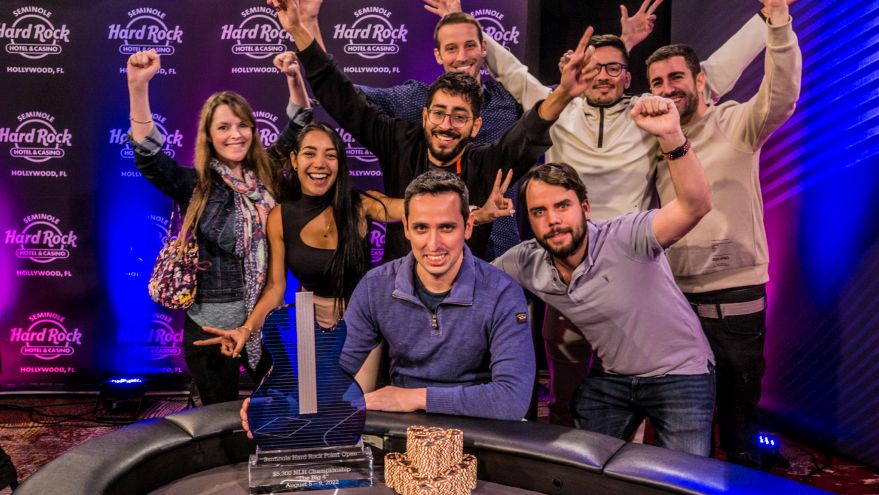 Entries totaling 1,110 each kicked in $5,300 at the Seminole Hard Rock Poker Open Championship, obliterating the $3 million guarantee and creating a prize pool of $5,383,500, with Spaniard Sergio Aido grabbing the first place prize of $900,100.

Aido's $900K prize was the third largest of his outstanding poker career. Tops on his resume is a victory in the €100,000 Super High Roller at the European Poker Tour Monte Carlo in 2019 for $1,771,337. A runner-up finish at the Triton Poker Super High Roller Series in the Philippines two years earlier was good for $1,337,019.

The SHRPO Championship ran from Aug. 5-9 and was the featured event in this year's festival in Hollywood, Florida that included 45 other tournaments over a two-week span. Aido's title and SHRPO guitar trophy came on the heels of a 4th place finish in the $50K SHRPO Super High Roller that added $133,375 to his bankroll.

Entering the final day of play as chip leader, Justin Liberto bowed out in 4th place when his A-Q offsuit found no help on the board versus the pocket nines of Aido. Liberto took home prize money of $305,955.

Pocket nines also spelled the end for Chris Brewer ($412,375) when his chips went all-in pre-flop with A-10. The man responsible for Brewer's bust was James Collopy, who holds the distinction of being the all time money leader In the District of Columbia, USA, with $4.1 million in earnings.

After knocking out Brewer, Collopy entered heads up action leading Aido in chips 26,525,000 to 17,850,000. The Spaniard pulled ahead by more than a 2-1 advantage after drubbing Collopy's pocket queens when his A-J made a jacks full boat.

Aido took the title home holding Qc-10c to Ac-5d of Collopy. The flop of Kc-6c-5h gave Aido a flush draw to his opponent's pair of fives. Collopy followed his pre-flop raise with a 600,000 chip c-bet, prompting Aido to raise to 1,850,000 after checking the flop.

A call from Collopy brought the 4c on the turn and a flush for Aido, who bet 1,800,000. With a nut flush draw and a pair of fives, Collopy again called. The 10h on 5th street paired the board. Aido checked, prompting Collopy to shove his remaining 12,300,000 chips, and Aido called with his flush for the well-played victory.