Thomas Evans Zanot hit the jackpot of a lifetime at a Las Vegas casino, winning a staggering $6.4 million at the Pai Gow table 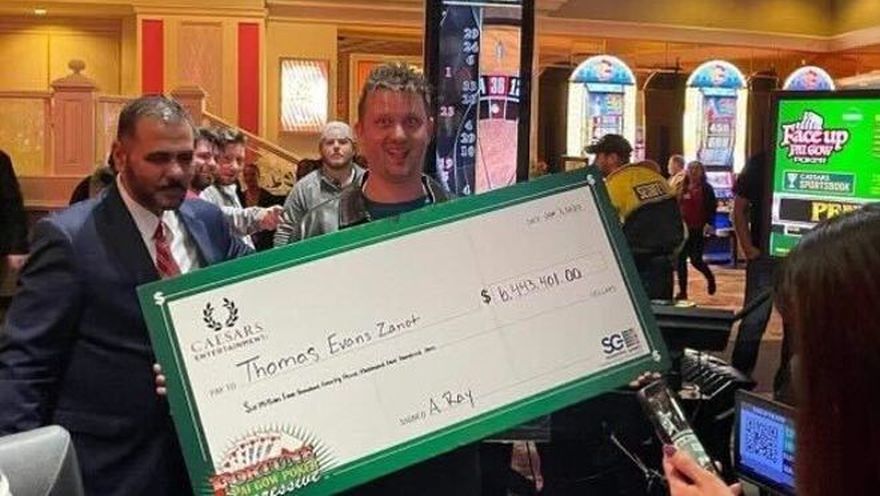 A little over a week ago, pro poker player Thomas Evans Zanot hit the jackpot of a lifetime at a Las Vegas casino, winning a staggering $6.4 million at the Pai Gow table. This will be a challenger for one of the largest jackpots in Las Vegas this year and is the first major jackpot of 2023.

To win the top progressive jackpot in Pai Gow, a popular table game played at most casinos, a player must first place a wager on a side bet and then hit the holy grail of poker hands: a seven-card straight flush. This hand is extremely rare, which is why the progressive jackpot is often so massive.

Zanot, originally from Arizona, has over $1.1 million in live poker tournament winnings according to Hendon Mob. He is known to play in low to mid-stakes events but may now move up in stakes thanks to the life-changing money he won at the Flamingo casino.

He revealed on Twitter that he was down about $375 over approximately 11 hours of play before hitting the lucky hand, a seven-card straight flush.

This isn't the first time that Zanot has had success in the poker world, he has also had great success in the World Series of Poker, with 60 cashes in bracelet events and another 12 in Circuit ring tournaments, but he has yet to win a bracelet.

The last time we saw him in a tournament was last month, where he placed 33rd in the WPT World Championship series at Wynn Las Vegas, taking home $99,600.

News of Zanot's big win quickly spread throughout the poker community, with many of his peers sending their congratulations.

One question that arose following the win was how much Zanot should tip from his massive payout. Mike McDonald reckons it should be around $43k, while other figures ranged from $50k to $300k. It's a question that many of us can only dream of having to consider.

With this life-changing amount of money, Zanot's future in the world of poker looks bright and many are excited to see what he will do next. Will we see him playing in high stakes tournaments across the globe in the coming year? Whatever he decides to do, there is no doubt that this win will change his life forever and we wish him all the best whatever he decides to do.