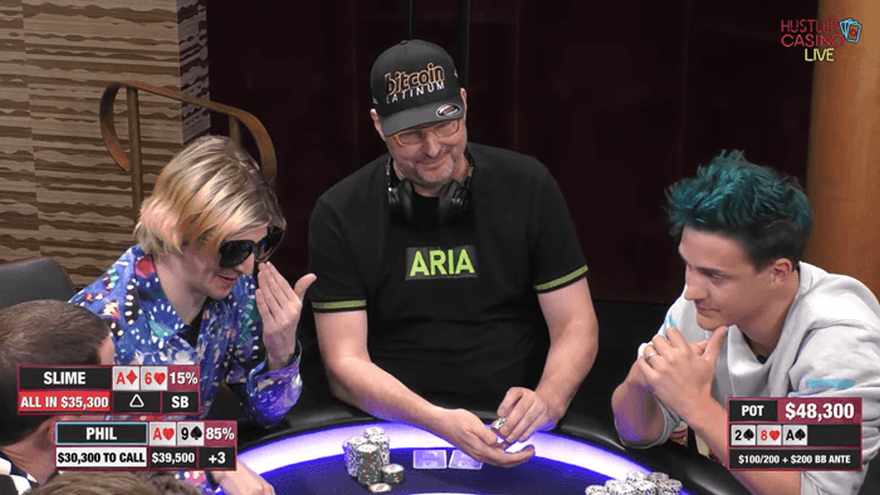 The session continued the Creator Poker Night stream earlier in the week, with somewhat more significant stakes. The game stakes were $100/$200 with a $200 ante and a buy-in of $50,000.

Alan Keating, Tom Dwan, and Phil Hellmuth were the only professional poker players on board. These players would be exclusively enough to promote the show. However, HCL exceeded expectations by filling the remaining five seats with famous internet content makers.

Even if those players weren't as much of an attraction, there was a crowning moment. Ryan Feldman successfully brought Joey Ingram out of his Trotskyist exile in Mexico. Ingram was the guy on the ground, interviewing players as David Tuchman provided commentary from above.

HCL seems to have cobbled this terrible event together to suffocate the new Live at the Bike stream. This fateful night, the two streams were competing. It would be best to merely glance at your Twitter feed to determine which stream has the most interaction.

Also would like to emphasize @phil_hellmuth is an embarrassment to poker pros. 99% of pros would have a great time and appreciate what’s happening there.

Imagine venturing into poker from chess with @alexandravbotez and see a long time poker legend curse her out over nothing. https://t.co/QIpqm1S2QL

The program is one of the most fascinating of a new frontier of live cash game shows.

Hellmuth appeared to be in a terrible mood from the onset. He seemed shrunken amid young extroversion, typically loud and outspoken, while Tom Dwan seemed cheerful.

Keating bet all of his chips on the opening hand. Ninja made the call with pocket eights. Keating was holding AQ. Keating recharged after his AQ holding failed to materialize. That hand established the tone of the evening.

A few moments later, Ninja and Keating both shoved again, this time around on the river, with Ninja the favorite. Keating had to rebuy after Ninja's holding held.

Before long, Phil began tapping the table, making a mockery of Ninja's AK preflop. That proceeded throughout the night, with Phil coming under fire on the internet for his relentless berating of the amateurs regularly beating him.
Hellmuth is used to playing the villain for the media, but he seemed confined to the sidelines in this game, an unfamiliar position for him.

Keating grinned and spoke with Alexandra Botez after losing a four-way all-in pot, Mr. Beast made fun of his loss, and Hellmuth sat and murmured to himself before ranting about Botez's style of play as his voice cracked and no one paid attention.

Botez has almost certainly dealt with worse throughout her years in the chess arena, but when she tallied his chips into her stack, she seemed ashamed of him.

The dispute concerning Hellmuth's probable angle-shoot, his chatting about his cards while the hand is still in play, not to mention his assaults on the dealers. We finally witnessed what Phil's gimmick looks like when surrounded by extroverts who leave him no opportunity to rant.

He crumbled while everyone else disregarded him most politely.

Jesus that last bit from from the commentators
“Well I can’t say I expected more, because we know Phil, but I hoped for more.”
“Yeah this is what I expected.”

The stream was one of the most active in terms of conversation and engagement. If HCL intends to compete with this stream in the future, they have set a high standard to meet.

Furthermore, if the viewership figures on Ludwig's live feed of the event are any indication, we'll be witnessing more people playing poker. You may watch the whole stream on YouTube.