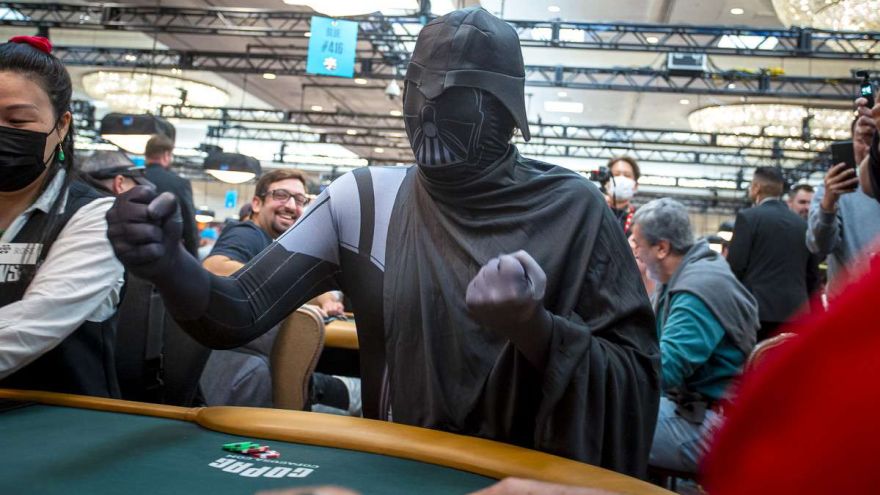 Phil Hellmuth has continued his tradition of entering the WSOP Main Event decked out in an extravagant costume. The 16-time bracelet winner loves to make a show when he arrives for poker’s showpiece event and this year was no different, but the reaction wasn’t exactly what we are used to seeing.

The costume of choice this year was Darth Vader from the Star Wars movies, but if we’re being honest it wasn’t up to the standard of years gone by.

One Twitter follower questioned if Hellmuth bought the outfit from a dollar store.

A little bit of behind the scenes with the dark lord himself ⁦@phil_hellmuth⁩ pic.twitter.com/9GcCSjiO6a

There wasn’t really any fanfare with this year;s grand entrance too. It was only Phil Hellmuth on his own with some music in the background. Though, to be fair, he had warned us only a couple of days before.

“Don’t be too excited for my @WSOP entrance this year. It’s JUST me. Just one guy in a costume (w some cool music). We didn’t have time to hire 16 models, or an entourage. At 2023 WSOP Main Event we will hire models, entourage, the whole works. #JustAGuyInACostume #POSITIVITY”

So, in the end there wasn’t any buzz in the playing hall with plenty of boos ringing out from the crowd. Lesson learned,we guess. More fanfare and effort needed for next year.

Phil Hellmuth’s day didn’t get any better after the damp squib entrance. Only 90 minutes after taking his seat the “Poker Brat” was heading to the rail after not winning a single pot.

Hellmuth did at least try to put a positive spin on it, reminding everyone that he will save a lot of energy for other upcoming events.

Can he win his 17th WSOP bracelet before the series wraps up? We wouldn’t bet against it. After all, his luck has to change some time. Two bouts of sickness and several bad beats has put Hellmuth’s WSOP among his worst ever. Let’s see if he can pull one out of the bag before it’s all over.