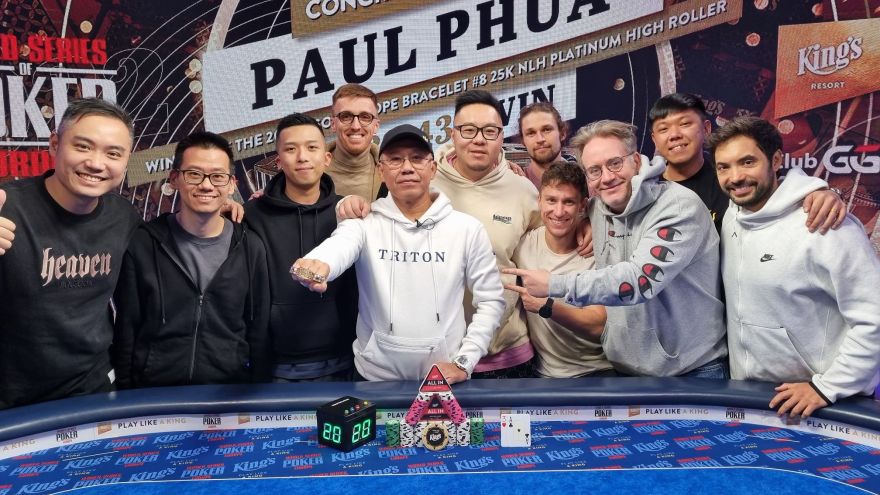 Paul Phua bagged the WSOP Europe Platinum High Roller title, seeing off the likes of Daniel Negreanu and Shaun Deeb at the final table to take the €482,433 top prize and his first WSOP bracelet...

The Triton Poker co-founder, and billionaire businessman turned highstakes “semi-pro”, was one of 67 runners to shell out €25k to vie for the Platinum High Roller title at Kings Casino in Rozvadov.

The Norwegian made it to the paid spots on day two, taking out short-stacked Vaclav Lattner on the money-bubble, but eventually fell in 9th place for a €45,242 cash courtesy of a brutal cooler...

Heath himself departed in 6th spot, falling to Paul Phua, who then KO’d Julien Martini in another big showdown, the Frenchman loving the flop, but the river not so much..!

Daniel Negreanu was chasing his 7th WSOP bracelet but he came up short when Phua again pulled a rabbit out of the hat...

That meant a 4th place exit for Negreanu, and he was followed to the rail by Shaun Deeb in 3rd, Phua again hitting a set on the flop to end Deeb’s search for a 6th bracelet.

Heads-up between Phua and South Korean Gab Yong Kim saw the Malaysian legend hold a 4-1 chip lead, and although Kim doubled early on, he couldn’t stop the tide coming in...


That was good enough for Phua to take down his first-ever WSOP bracelet win, describing it as “the highlight of my poker career!”

“It's a very different kind of feeling, you know,” Phua told reporters afterwards. “You don't get to do this all the time. Not often. I didn't expect to win because there are so many players around. But the structure at the end is very short which suits players like me.”

Admitting “I'm lucky enough that money doesn't matter,” Phua explained, “I just try to play my best, and try to be competitive against pros. You know, we don't get to study every day. But as I play more I think I get a little bit better and have a better chance.”

Of the numerous fans celebrating on his rail, he said: “I have a bunch of great friends you know. I would like to thank all of my supporters and friends.”

Phua also joked: “I think the older generations support me more because they like to see the older guys beat the young guys.”