The Belarus-born pro was among 38 entries to the $25k buy-in NLHE tournament, and the field was one of the most star-studded seen so far in the 12-event series 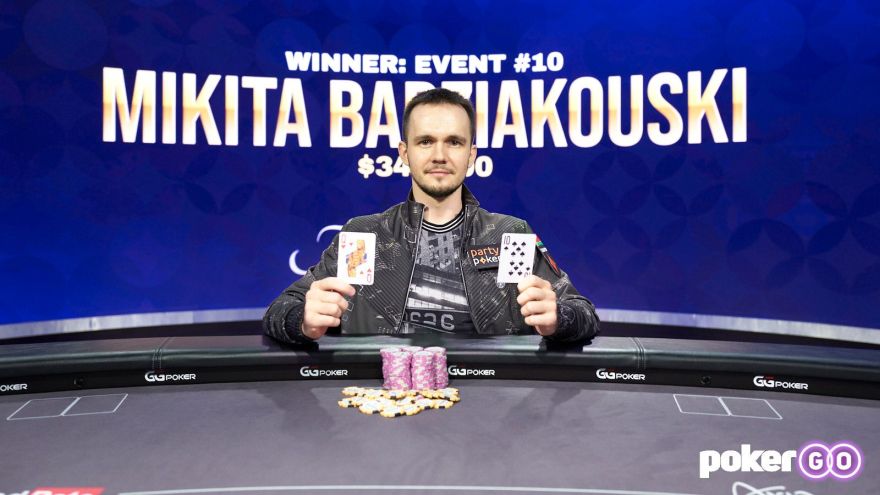 Mikita Badziakouski bagged event 10 on the 2021 Poker Masters Series schedule, pocketing $342,000 and admitting the role “luck” plays even in the highest buy-in events with the world’s leading players.

The Belarus-born pro was among 38 entries to the $25k buy-in NLHE tournament, and the field was one of the most star-studded seen so far in the 12-event series.

Alex Foxen and Dan Smith departed early on day one, followed later by Sam Soverel and David Peters, and the unfortunate bubble-boy was Bill Klein, the skilled highstakes amateur who splits his retirement between poker, golf and blackjack.

The remaining half-dozen were of the highest calibre too, Jason Koon, Seth Davies and Ali Imsirovic regulars on the Super High Roller circuit, while Chris Brewer was making his 5th cash out of 10 events.

Brewer fell in 6th spot to end day one and set the final table and the biggest name at the final table, of course, was Daniel Negreanu – KidPoker celebrating a renaissance of sorts at the highest level.

With one win and two other cashes in the past week or so, Negreannu was looking to return to the top of the Purple Jacket leaderboard race, having already bagged the PokerGO Cup race a couple of months ago.

Jason Koon was first to hit the rail, and he was followed by the young Bosnian pro Ali Imsirovic in the following brutal hand, no Royal or straight flush saver on the river for Koon...

Badziakouski also eliminated Negreanu, the latter’s pocket sixes unable to crack the Belarus pro’s aces and meaning Daniel would have to settle for third spot in the event and second spot on the leaderboard.

Heads-up, and Davies was one card away from victory until the river saved Badziakouski, who took the win shortly afterwards with another rivered saviour.

“It feels good, but you know, it’s just about luck,” Badziakouski told PokerGO reporters after his win. “We had 38 entries and I had my chances and that’s how it happened.”

With just two more events to go, a $50k NLHE and the $100k buy-in Main Event, the destination of the Purple Jacket is still far from decided.