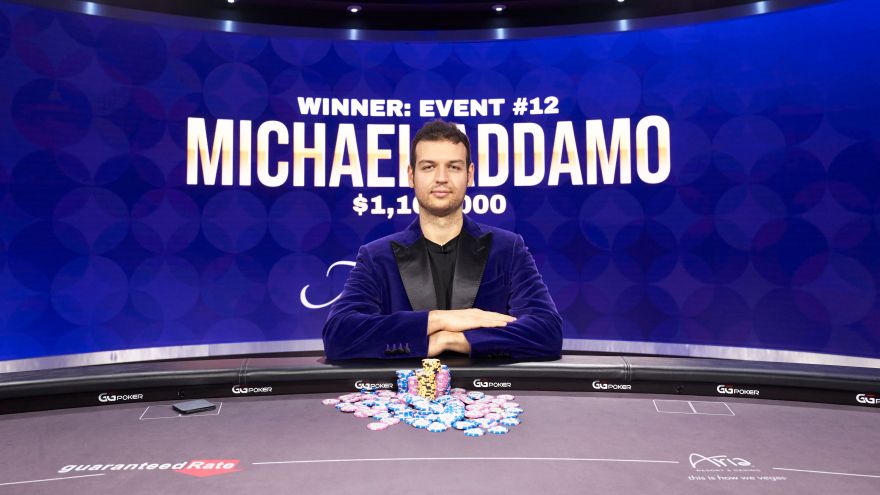 Australia’s Michael Addamo completed an incredible one-two combination, taking down the Poker Masters Main Event for $1,160,000 and with it the Purple Jacket as overall series winner!

The Aussie highstakes crusher had popped up in the penultimate event 11 of the 12-tournament series to grab victory and vault himself into top spot in the leaderboard race, ahead of Lou Garza and Daniel Negreanu.

With the final event being the $100k buy-in flagship Main Event, there were enough points available for several players to win the Purple Jacket, and 29 entries meant there was $2.9million in the prizepool.

Only five players would share in that kitty, however, and day one saw Negreanu’s hopes dashed as he bust out when a deep run was required...

He was in illustrious company, though, as Jason Koon, Ali Imsirovic, Sam Soverel, and even Bryn Kenney – the leading all-time tournament moneywinner making a rare Poker Masters appearance – joined him on the rail.

By the end of a tough day one, only five players remained, all in the money, and Belarus beast Mikita Badziakouski was first to depart the final table at the hands of Addamo.

When the Australian also KO’d Stanley tang in 4th, it looked like a repeat of the $50k buy-in event 11 of the previous day was on the cards, when Addamo despatched all four of his rivals en route to victory.

However, Nick Petrangelo took care of Alex Foxen in 3rd to set the heads-up finale against Addamo, who with Foxen’s exit had secured the Purple Jacket and the $50k bonus prizemoney that goes with it.

There was close to $2million still to be argued over and Addamo had a 4:1 chip lead to play with, eventually ending the battle in the following hand...

Having called Petrangelo’s pre-flop raise, Addamo check-raised on the flop...

...and then called off Petrangelo’s triple-barrel bluff on the river...

“It’s been an incredible run of winning a lot of all ins – it’s just insane,” Addamo told PokerGO reporters afterwards, describing his feelings as “mostly relief” but adding “I’m sure the excitement will come soon.”