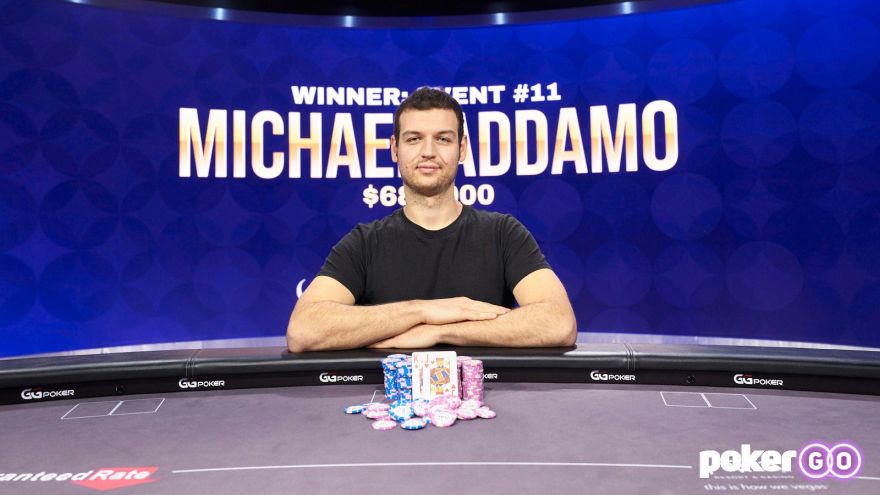 Michael Addamo has turned up to the 2021 Poker Masters series when it really matters it seems, taking down yesterday’s $50k for $680,000 and taking the chip lead into today’s $100k Main Event final table, vaulting himself into the Purple Jacket leaderboard race in the process.

The Australian highstakes pro was one of 34 entries to the penultimate event of the 12-tournament series being held in the PokerGO studios at the Aria in Las Vegas, with only 5 players set to share in the $1.7million prizepool.

Day one set about whittling the field down, this week’s previous winners Daniel Negreanu, Stephen Chidwick, and Mikita Badziakouski among the early bustouts.

David Peters was the last man to miss out on the money, his top pair -top kicker no match for David Coleman’s turned flush, Coleman completing a hatrick of KOs to set the final table.

Day two dawned on a stacked final table and considering it was only Addamo’s second event of the series it became a remarkable rout, the Aussie star taking out all four of his opponents in succession.

First up was Cary Katz, his jacks no match for Addamo’s kings, and then it was the turn of Alex Foxen to hit the rail courtesy of a dominating big slick.

Coleman’s deep run ended in 3rd when he lost a race with pocket 4s against Addamo’s queen-jack, the New Jersey pro taking $272,000 and continuing a fine debut year on the highstakes tournament circuit.

Heads-up saw Addamo face off with another huge name in the highroller game, Jason Koon, and there was no stopping the Aussie sensation, king-jack over king-nine the deciding hand to give Addamo victory.

“It was incredible,” Addamo told PokerGO reporters after his amazing final table run. “I had a great stretch of hands and I pretty much had it the whole time on the final table, so I can’t credit it to any good bluffing skills. Just good fortune.”

Not only did the win launch Addamo to top spot of the Purple Jacket leaderboard race, ahead of Lou Garza and Daniel Negreanu, but he jumped straight into the $100k Main Event and ended the day as chip leader.

A top two finish at final table will lock up the Purple Jacket and the $50k bonus, and we’ll have all the best of the action for you in our daily Poker Masters reports, so be sure to check in!