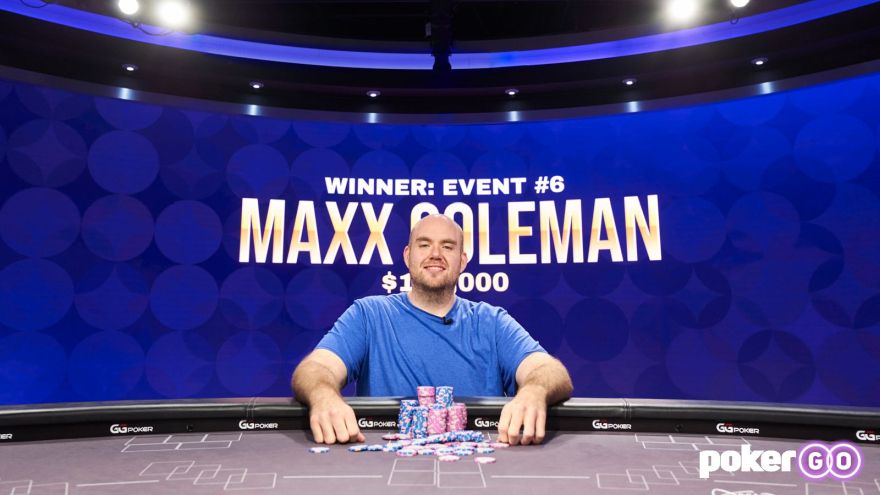 Maxx Coleman took down event 6 of the 2021 Poker Masters Series last night, fighting off a field that included old-school legends Johnny Chan and Eli Elezra to lift the 8-game title and $120,000...

There were 30 entries to the $10k buy-in 8-game tournament, with Daniel Negreanu looking to go back-to-back having won the previous event, putting him on top of the race to the purple Jacket leaderboard.

The three legendary names would all fall well short of the paid spots, however, only five players cashing, with the following hand bursting the money bubble...

With five players returning for the final table on day 2 at the PokerGO studios in the Aria, Jeremy Ausmus and Chad Eveslage were enjoying their second cash of the series, while England’s Stephen Chidwick, Swedish legend Erik “King of Ding” Sagstrom, and Maxx Coleman were all on their first.

Ausmus and Sagstrom departed in 5th and 4th respectively, and then it was Chidwick’s turn, a No Limit Hold’em round seeing Coleman’s bigger ace holding up to send the Englishman to the rail.

That left us heads-up between Coleman and Eveslage for the title, a $42k difference between 1st and 2nd and Coleman holding a 3:1 chip lead.

That lead changed hands briefly, but eventually Coleman caught his opponent in a hand of Razz, his 9-8-3 low beating Eveslage’s 9-8-5 to secure the trophy.

Coleman told PokerGO reporters afterwards: “It feels good. This is I think my fourth final table in five events [here at the PokerGO Studio], so to finally get the win feels pretty good.”

Daniel Negreanu still sits atop the overall leaderboard at the halfway point of the series, closely followed by Brock Wilson and Sean Perry.