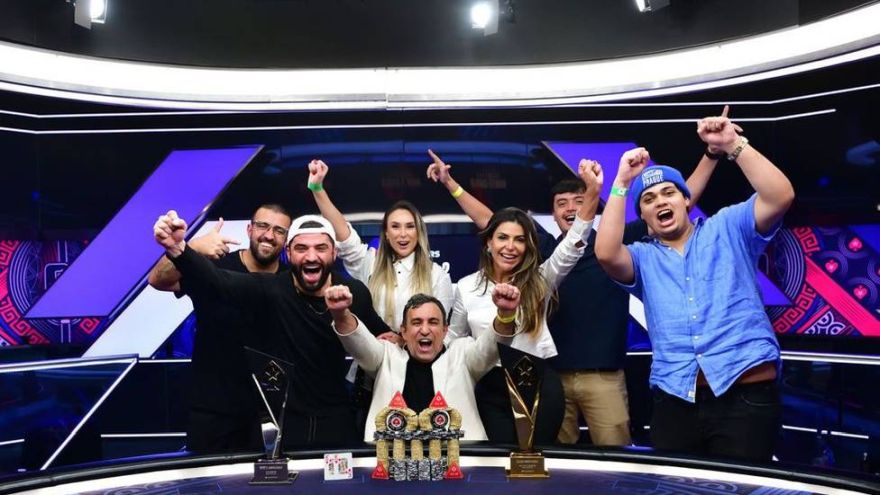 A total of 1073 entries for the flagship event of the festival held at the Monte Carlo Sporting in Monaco, meant a prizepool of more than €5million, and there were plenty of thrills and spills en route to the money.

A who’s who of European poker fell before the paid spots, Victoria Coren Mitchell unable to bag her third EPT ME title, though she plays rarely nowadays. Also falling by the wayside were the likes of Patrik Antonius, Dominik Nitsche, Kitty Kuo, and Mustapha Kanit.
Harpreet Gill and Danny Pike bubbled the money at the same time, leaving, and then it was a race to the final table, two more days of eliminations seeing 2021 WSOP Main Event champion Koray Aldemir, Tim Adams, Ana Marquez falling short of the ultimate prize.

The final table of six saw a cautious start, and it was well after dinner before Germany’s Erkan Soenmez feel in 6th place, a €167,050 payday for the online qualifier.

Hugo Pingray’s hopes were dashed when Simoes spiked a nine on the turn to overcome his big slick, 5th spot and €228,460 for the Frenchman.

Jaime Cervantes’ tournament could have ended differently if the following incredible hand had played out differently, a brutal bad beat and a strange quirk of fate (read coincidence!) saw him with the big ace facing pocket nines in his bust-out hand, falling in 4th spot for €298,710.

It is now heads-up in the Main Event, yes heads-up.

Moldova’s Dragos Trofimov 3rd spot finish lifts him to withing touching distance of the number two spot in his small nation’s all-time money-winners list, although both he and Vyacheslav Stoyanov are some $4million short of Pavel Plesuv in top spot.

Heads-up, finally, and it was Denmark’s Morten Hvam trying to stop the Brazilian express, Simoes. A 4:1 chip lead, and no deal agreed despite talks, soon saw Simoes pull away even further

Eventually it all came down to a cooler of sorts on the 168th of the final table, all the chips going in on the flop...


Simoes’ kings had held up and he bagged the €939,840 and Brazil’s first-ever EPT Main Event victory, with Hvam taking a huge €564,640 runner-up consolation prize.