Justin Saliba scooped the $195,000 top prize at the 2023 PokerGO Cup in Vegas, fending off Anthony Hu heads-up to take the last of the ‘preliminary’ $10k events at the highroller series 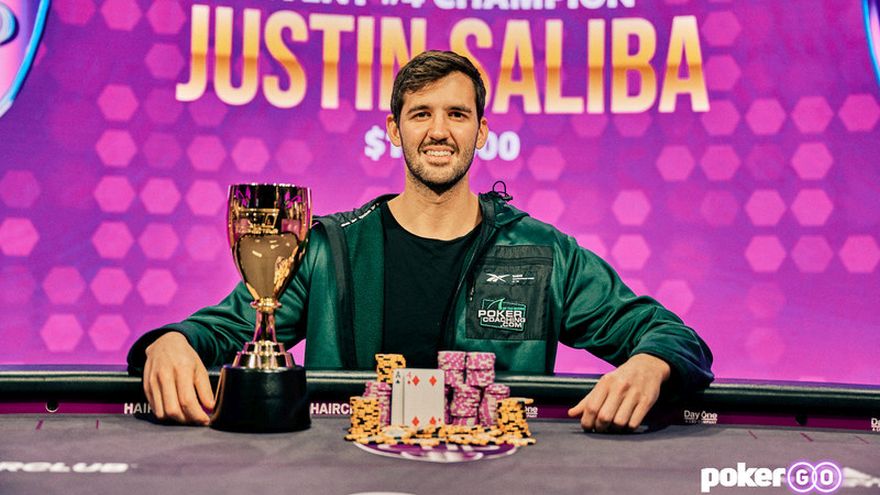 Justin Saliba scooped the $195,000 top prize at the 2023 PokerGO Cup in Vegas, fending off Anthony Hu heads-up to take the last of the ‘preliminary’ $10k events at the highroller series...

The young Las Vegas pro was one of 78 entries, numbers slightly down on the previous three $10ks this week. That meant only 12 players would share in the $780k prizepool, with Saliba incredibly looking for his first-ever live win, despite $2million in tournament cashes.

Cary Katz, the PokerGO founder, was looking for his 4th cash in a row but came unstuck just before the money...

By the time the final table of 6 was set, Anthony Hu was in the chip lead, having sent Kristen Foxen out on the bubble and chipped up from there. Saliba was a lowly 5th with less than 20BBs, but it was Erik Seidel who would bust first in brutal runner, runner fashion ...

Andrew Moreno had to settle for his second 5th place of the series when he tangled with Mateos, and then Calvin Lee hit the rail courtesy of Anthony Hu and Justin Saliba disposed of Mateos in 3rd.

Heads-up saw Hu with a 2-1 chip lead but it didn’t last long, Saliba consistently chipping away until the roles were reversed. Hu looked like he might square things up again, but the river had other ideas...

...and with that, Justin Saliba had broken his tournament duck!

Saliba’s win jumps him into a mind-table spot in the leaderboard race at the halfway point, with Mateos’ consistency giving him a clear lead at the top.

The highroller series continues today with the final table of event #5, a $15k buy-in, with event #6, a $25k buy-in also kicking off at the PokerGO studios in the Aria casino.

We’ll be back with all the best of the action and results tomorrow, so be sure to check back in!