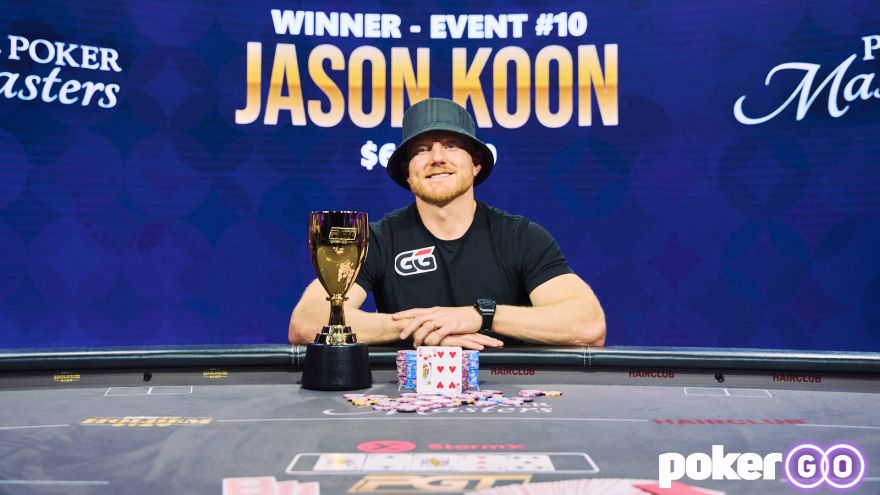 Jason Koon closed out the 2022 Poker Masters series in Vegas with a $666,000 takedown of event 10, seeing off a stellar final table in the $50k buy-in tournament.

Daniel Negreanu was one of the seven who made it through day one, but as a short stack he was also in danger of missing out on the money. A useful double-up looked distinctly possible when he got it all-in good with aces against Seth Davies, but it wasn’t to be for Kid Poker...

Out on the bubble for Negreanu and $92,500 sewn up for the remaining half-dozen, a veritable who’s-who of the highstakes poker world.

There was more than just the prizemoney on the line, though, with the leaderboard race for the Purple Jacket still wide open, event 9 winner Sean Winter in the lead but unable to affect the standings.

When Davies fell to Koon his chances were gone, $148k a healthy amount to soothe the pain, and then Erik Seidel’s chances were scuppered. Needing a victory to leapfrog Winter, a three-way, pre-flop, all-in clash went the way of Koon...

...and that meant Winter would don the Purple Jacket and take down the $50,000 bonus.

Scott Seiver fell in 3rd when Koon’s backdoor gutter appeared, leaving Koon heads-up against Mateos for the title and the final hand played out in Koon’s favour for the $666k win....

Koon, who broke through the $40million career tournament winnings barrier with the victory, told PokerGO's Jeff Platt afterwards: “I haven't played many tournaments, but I guess the ones I have played have gone pretty good. I've played a lot less and hung out with my family, but when I've come to play I've really been focused and I feel like I've played some of my best poker this year."