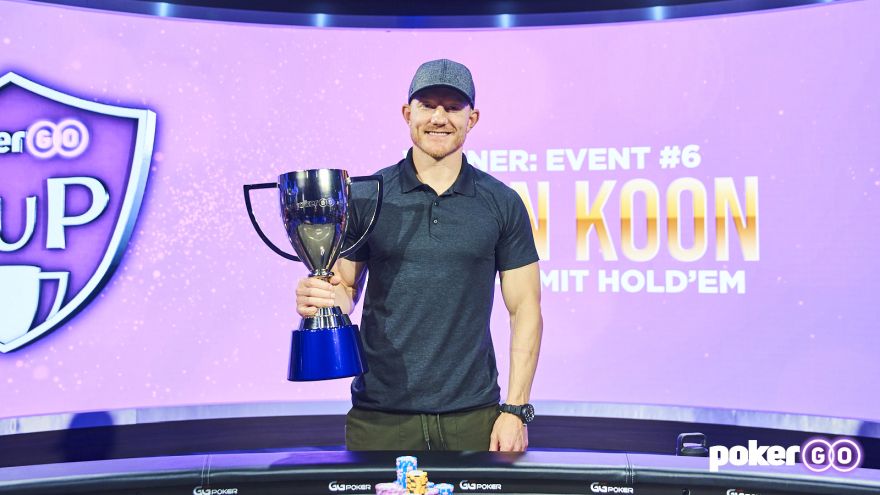 Jason Koon continued the big-name dominance of the PokerGO Cup, the partypoker pro and Triton ambassador lifting his first trophy of 2021 and a hefty $324,000 paycheck...

Koon was among 36 entries to the second of two $25k buy-in tournaments being held in the PokerGO studios at the Aria casino in Vegas, event six out of eight on the highstakes series schedule.

Only the final table of six would be paid one of those players – John Riordan – was responsible for busting a trio of in-form opponents just before they reached the cash.

Riordan ended Ali Imsirovic’s hopes of taking down his 3rd title of the week, while Alex Foxen was denied a final table run at his second title and David Coleman was also sent to the rail.

The Florida-based pro also accounted for the first KO of the final table, taking out Steve Zolotow, and then it was Koon who dashed Cary Katz’s hopes of glory on “home soil”.

A three-way all-in then ousted Anuj Agarwal, Koon’s aces holding up and then he disposed of Riordan in third spot, the $144,000 cash taking the Florida man over the $1million live tournament earnings milestone.

Heads-up and it was all over quite quickly, Koon flopping top set after limp-calling Winters’ shove, and that was good enough for his first PokerGO Cup victory.

Thee win, coupled with his earlier runner-up finish, vaults Koon into 2nd place in the overall leaderboard race, as seen below, although plenty can change over the final three events, with the buy-in rising to $50k for event 7 and then the monster $100k finale to round out the series.