Italy’s Giuliano Bendinelli has scooped the EPT Barcelona Main Event title and a monster €1,491,133 payday after recovering from just one big blind on the final day’s play! 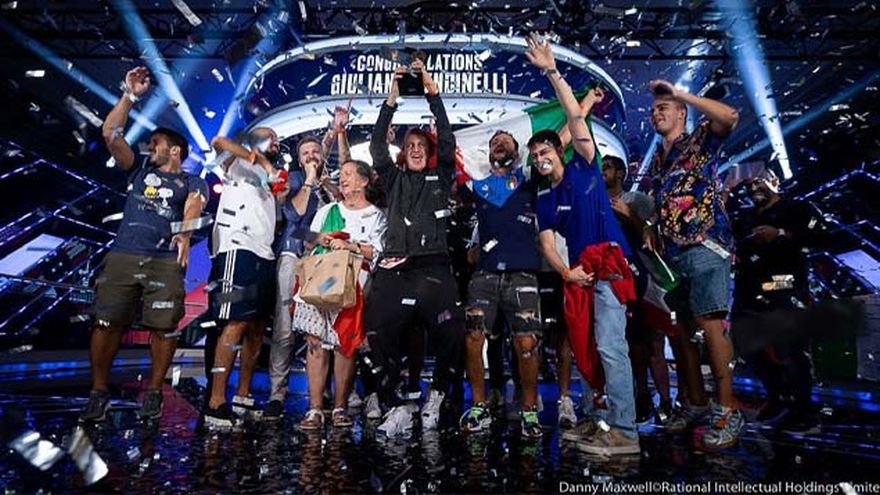 Italy’s Giuliano Bendinelli has scooped the PokerStars EPT Barcelona Main Event title and a monster €1,491,133 payday after recovering from just one big blind on the final day’s play!

A record-breaking field of 2,294 had set off on a quest to bag the €5,300 buy-in EPT Barcelona Main Event at the Casino Barcelona, more than €11million in the prizefund and 328 players hitting the paid spots.

The money bubble burst on day two, but it would take until day six for the final half-dozen to battle it out for top honours, two Brazilians mixed with players from France, Italy, Norway and the Czech Republic, all guaranteed at least €334,480.

It looked like it was all over early doors for Bendinelli after he ran AQ into Guerrero’s AK, leaving the Italian with just over one big blind, but he would mount an incredible comeback.

The first casualty was in fact Kayhan Mokri Roshanfekr, entrusting his last 10 bigs to a healthy ace but finding himself up against pocket kings, 6th spot and a lifetime best score for the Norwegian.

He was followed to the rail by Czech player Patrik Jaros at the hands of Frenchman Jimmy Guerrero...

Down to just four and Bendinelli’s incredible comeback was complete when he powered into the lead by KOing Kovalski, another pair over pair situation...

Brazil’s Neville Costa would have to settle for third place and a €734,470 cash when he was the next victim of a resurgent Bendinelli, who then spiked a river straight to survive as Guerrero fought back heads-up.

With a heads-up deal in place, the duo eventually settled the destination of the trophy in dramatic fashion...

...and another check-call brought the river, Guerrero with “No idea what he’s up against” as the commentators joined in the shock when the river hit...

...filling Guerrero’s boat but giving Bendinelli quads! All the chips went in and the Italian was celebrating before returning to show his hand...

“I can’t believe it. It’s the best day of my life. I’m speechless,” an ecstatic Bendinelli told reporters.

He added: “I’m proud about how I played, but also I won some showdowns, of course, to be here. I need luck, like the last hand with quads against a full house, so it’s a mix between skill and luck. I’m grateful to be here.”