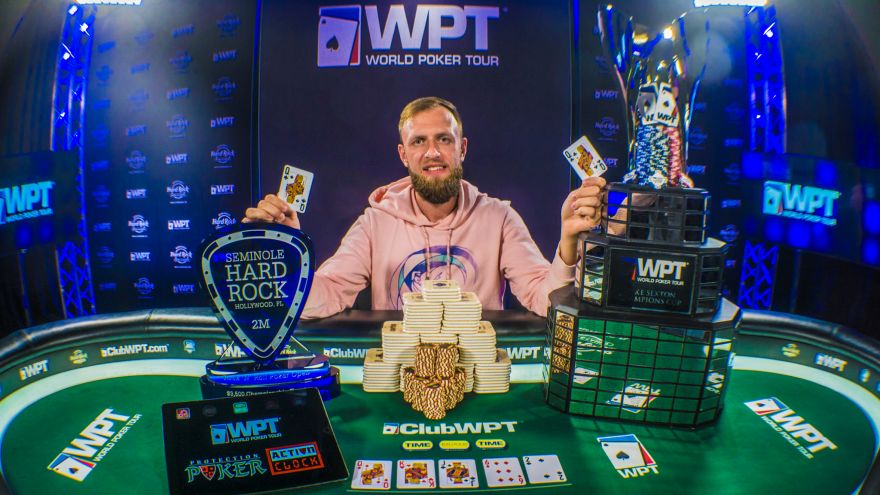 Lithuania’s Gediminas Uselis scooped the biggest payday of his career by far this week when he bagged the WPT Seminole Rock ‘N’ Roll Poker Open in Florida for $778,490

The tournament attracted 1566 entries at $3500 each, the likes of Kristen Bicknell, Ali Imsirovic, Ema Zajmovic, Natasha Mercier, Joseph Cheong, and UFC star Colby Covington all making it to the paid spots.

Bicknell bust out in 15th place for just over $40k while Joseph “subiime” Cheong bagged 10th spot, bubbling the final table but pocketing almost $80k.
By the time day 6 arrived, the remaining half dozen had locked up $170k, and short stack Anshul Rai bust out for that amount on the very first hand of the day, his big slick outflopped by chip leader Harout Ghazarian.

Clayton Maguire was next to fall, his pocket 8s unable to hold up against Selahaddin Bedir’s small ace, and then it was Bedir’s turn to hit the rail at the hands of Jacob Ferro...

Are you tuned in?

Down to the final three, and Ghazarian’s dreams of WPT glory were ended when he shoved his deuces into Uselis’ kings...

That left Uselis heads-up against Ferro and it took less than 20 hands to separate them, a huge cooler for Ferro but great drama for those watching...

The pre-flop raising war unsurprisingly saw the stacks go in, Ferro at risk, with the jack in the window crushed by the queen that followed...

...and there was to be no reprieve for Ferro in the set-over-set finale...

Ferro took $573,605 for his runner-up finish while Uselis walked off with $778,490, telling WPT reporters afterwards: "I came here, and this was the first tournament I sat down in. I didn't sleep much, and I just kept going and going. I was playing small pots, big pots, slowly building. Slowly, nothing special."

The victor added: "There was for sure a bunch of action. It was a crazy (final) table, so I just needed to wait. I made a couple of moves because there were a couple of amateurs as well, so I was really lucky to make this final table."

It topped a remarkable last few months for the Lithuanian, who resides in California, Uselis scooping the $325,428 top prize at the MSPT Venetian in October.

He adds a WPT title to last year’s WSOP Online bracelet which saw him take down the $400 Forty Stack No Limit Hold’em for $227,186.