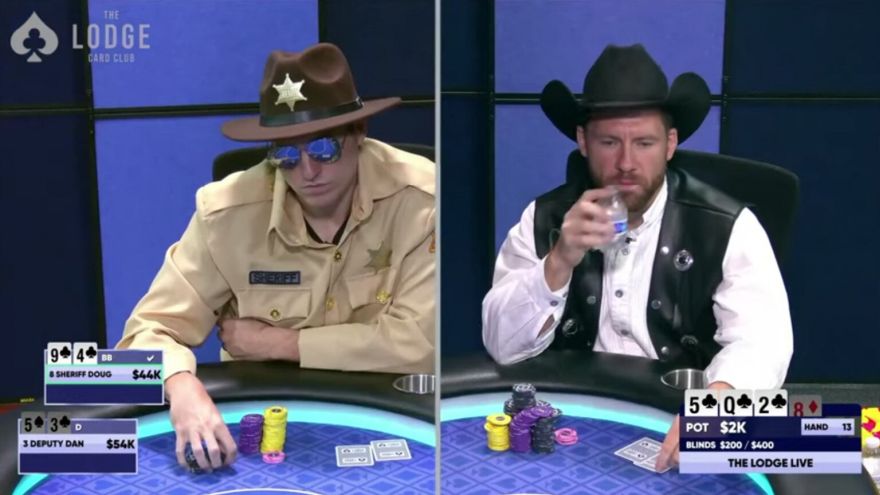 A couple of Fridays ago, Doug Polk invited Dan “Jungleman” Cates down to The Lodge poker room for his latest heads-up challenge - a monster $200/$400 NL game where both players dressed up for the cameras.

Polk wore a sheriff’s outfit while Cates took on the role of a cowboy and apparently insisted on staying in character for the entire evening, annoying his opponent before the battle even started.

My $200/$400 Texas showdown vs @junglemandan is starting up shortly. pic.twitter.com/3o72ihaCV1

Although Polk and Cates have a lot of playing history behind them, this match had a more light-hearted feel to it. No longer are the pair fighting for status as the best in the heads-up format, rather just playing a game they love for high stakes to please the fans and for some bragging rights.

While writing this tweet he turned to me and said

"Any last words ya have to say"

With both men dressed up in their respective characters, they each bought in for $50,000 (125 big blinds).

Polk took the early lead with Cates fighting back until he picked up a big pot to almost square things up. But then Cates might have had a rush of blood to his head as momentum picked up because he lost an $18,000 pot with a bluff gone wrong soon after.

Then an all-in confrontation saw Polk get his aces in against Cates’ pocket queens with both players agreeing to run it twice. Luckily for Polk this saved him an untimely double-up for Cates as a queen landed on the first flop with the second board seeing Polk the winner.

Another similar hand happened not long afterwards when Polk had sixes against Cates’ cowboys but running it twice saved Polk again.

Jungleman gets caught bluffing and taken to JAIL ($48,000 pot) pic.twitter.com/vuiUzz5Er8

As the match headed towards its conclusion, Cates managed to pull back his losses from what was $200K into only five figures. And when it was all done that deficit was down to only $53,000, marking another nice result for Doug Polk after he won $142,000 for finishing fourth in the recent Lodge Championship Series Main Event.

Any poker fans who enjoyed watching this match should keep their eyes peeled for Polk’s next match which looks as if it will be against Richard “GingePoker” Sheils who tweeted his willingness to step up.