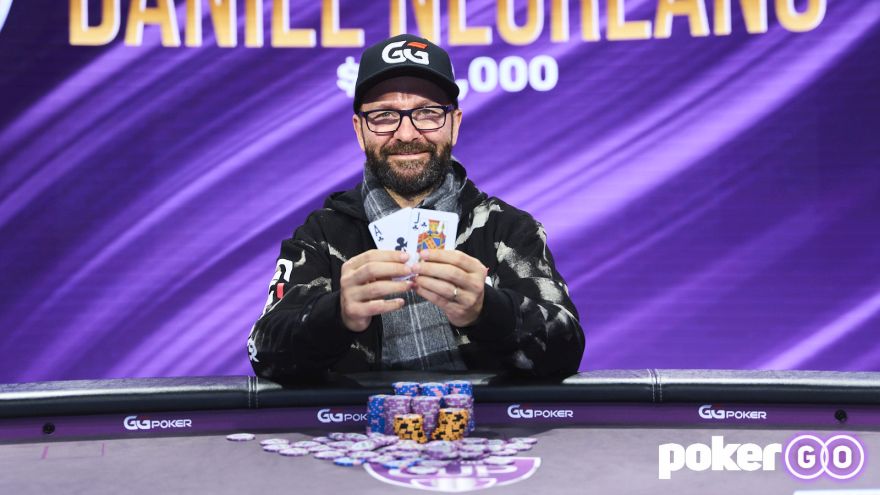 Reigning PokerGO Cup holder Daniel Negreanu finally found his mojo when he bagged event 6 of the 2022 series, scooping the $350,000 first prize and setting himself up for a late-run defence of his title...

And we go live to @RealKidPoker at the 2022 PokerGO Cup! pic.twitter.com/LZbSeQc0XY

DNegs was one of 35 entries to the 6th of 8 tournaments being held at the PokerGO Studio inside the Aria, last night seeing the final table of the second $25k buy-in No Limit Hold’em events – the fields inevitably shrinking as the buy-in gets higher.

This week’s winners Sean Perry and Nick Petrangelo both busted well short of the five paid spots, and a poor series continued for the likes of highstakes tournament crushers Ali Imsirovic, Jason Koon and Sam Soverel.

Those who did make it to the final table and a share of the $875,000 prizepool alongside Negreanu were Stephen Chidwick, Vikenty Shegal, Brock Wilson and Sean Winter.

It was a surprise final table for Chidwick, who thought he had busted late on day two and had to be called back by fellow players, turning his tiny stack into a payday.

Meanwhile, chip leader Winter disposed of Brock Wilson in 5th spot with an ace-cracking run out...

Short stacks Negreanu and Chidwick both survived all-in, at-risk scares, but eventually the Englishman fell in 4th spot, and that was followed by Negreanu taking out Shegal...

That cooler saw Shegal take $140k for his 3rd spot finish and left Negreanu facing Winter for the win, and there was to be no denying KidPoker who had finally found his PokerGO Cup mojo...

Negreanu explained afterwards how he was talked back from the brink of quitting the series by Jeff Platt: “I’m not gonna lie, I actually genuinely have to thank Jeff Platt because after event 5 I was so frustrated that I was building chip stacks, and dominating the early levels, but didn’t have a single cash to show for it, so I was just done.”

DNegs added: “I didn’t know if I could take it anymore. I’m in the gym and Jeff texts me and says, ‘You know if you win one of these [three $25k tournaments] and the $50k that you can still win the PokerGO Cup.’

“In my head, I was like, ‘So, you’re saying there’s a chance?’ As soon as I heard that, I thought, ‘All right, let’s do this. Let’s give it one more shot,’ and I did. It was a very different event 6 than the first five. I had no chips and I had to rebuy, the whole deal. But who knows, the poker gods are weird.”

The victory leapfrogged Negreanu up to 8th place in the overall standings, and he knows there is still work to be done to catch leader Jeremy Ausmus.