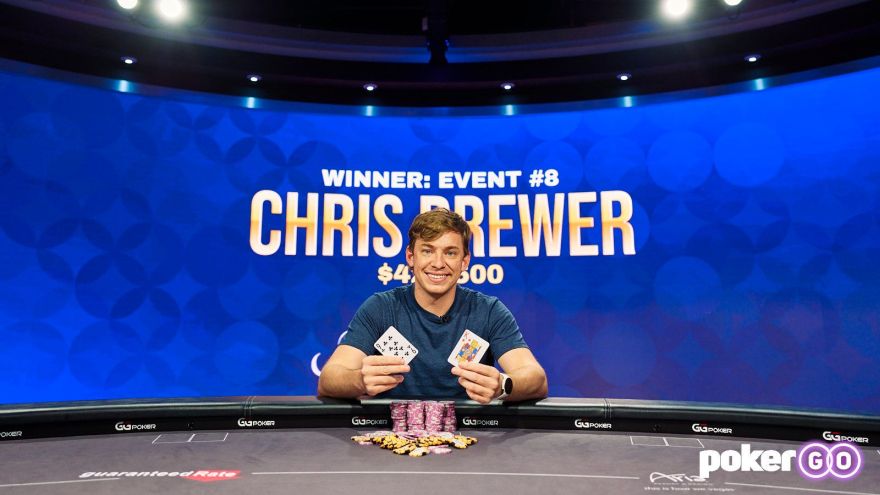 Chris Brewer scooped the biggest tournament cash of his career at the 2021 Poker Masters series last night, taking down the $25k buy-in NLHE event 8 for $427,500 and leapfrogging his way to second spot in the race for the Purple Jacket.

With 57 entries, the first of three $25k events produced a prizepool of $1.425 million, and with only nine players getting paid someone had to be the bubble boy, Jonathan Little stepping up to the unlucky plate with pocket aces...

Alex Foxen made it to the paid spots, 7th place and $71,250 for the highstakes regular, with Matthew Wantman bagging his 3rd cash of the series in 6th place just before play ended on day one.

The five who returned for day two and the final table included WPT title record-holder Darren Elias, as well as Brock Wilson, John Riordan, Lou Garza, along with Brewer – the latter quartet already having nine Poker Masters cashes between them in the past week.

Riordan fell first, and he was soon joined by Brock Wilson, who lost most of his stack with sixes against Elias’s tens, Wilson finished off next hand by the same opponent.

Three-handed play was a long-winded affair despite the relatively big blinds and antes, with Garza and Brewer swapping the small stack while Elias cruised along and bullied whenever the chance arose.

Something had to give, of course, and eventually a fatal clash of hands arose...

That meant Garza was out in 3rd spot for $199,500, leaving Brewer and Wilson heads-up, the former with a big chip lead. That was soon reversed and the pair swapped chips until finally Elias was all-in and at risk...and dominated

The board bricking meant that Brewer took the win and $427,500, and vaulted himself to 2nd place on the overall leaderboard, with the most money won and ahead of Daniel Negreanu, but trailing Brock Wilson on points.

The race to the Purple Jacket is heating up, but with two $25k events as well as a $50k and the $100k Main Event still to go, there’s plenty of time for someone to cause an upset.