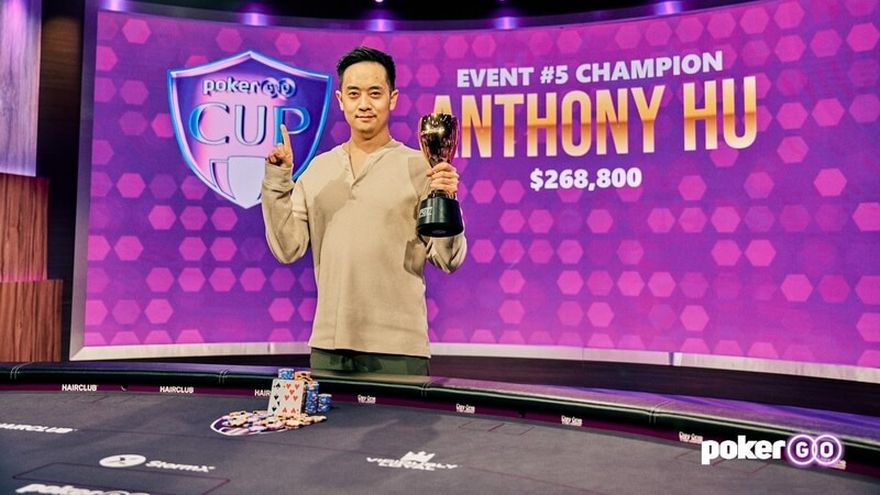 Anthony Hu bested his runner-up spot in event 4 of the 2023 PokerGO Cup by taking down event 5, adding $268,800 to his week’s tally and jumping straight to the top of the Series’ leaderboard!

With the buy-in rising to $15k after a quartet of $10k’s in the 8-event highroller series at the PokerGO Studios inside the Aria, the resulting entry was down to 53 with 8 spots paid.

Daniel Negreanu was looking for his second cash and a second-half charge at the leaderboard but his hopes were dashed when he exited in 10th spot to a naughty turn card...

When Leonard Maue couldn’t improve against Hu’s pocket sevens, the players were in the money, with Ed Sebesta and Aram Zobian both looking for second titles of the series.

Neither player could quite replicate their successes of last week: Sebesta fell in 7th when his queens couldn’t survive the river against Hu’s up-and-down straight flush draw, and event 2 winner Zobian’s deep run ended in 4th place courtesy of a cruel river card...

That left three players to fight it out for the podium positions and Dylan DeStefano had to settle for 3rd place and $117,600 when Hu continued to hit the board hard, big slick against KQ too much when an ace and king appeared on the flop.

Hu, however, had other ideas, hoping to go one better than his runner-up spot in event 4, won by Justin Saliba. The cards agreed with him and Seidel couldn’t get away from Hu’s river all-in reraise...

We’ll be back tomorrow with all the best of the action and results from the $25k buy-in event 6, with Cary Katz and Alex Foxen among the final table of five, led overnight by Orpen Kisacikoglu. Be sure to check in!